Snapdeal reported on the verge of being sold to Flipkart

Japanese investor SoftBank is believed to be reworking its plan for the sale of ecommerce platform Snapdeal – with market leader Flipkart the likely buyer - and a final decision is likely to be made in the next few weeks, according to reports on Wednesday. 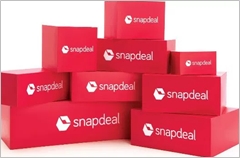 According to NDTV, a consensus could not be reached for the sale proposal at Tuesday's board meeting of Snapdeal, where SoftBank has a significant stake and board representation, but the Japanese major is continuing to work on getting support of other directors. An announcement on this is likely to be made in the next 4-8 weeks.

Most reports suggest that the country's third-largest online shopping platform Snapdeal could be sold to Flipkart. But Paytm's name has also come up as a potential buyer. Alibaba, which is a prominent shareholder in Paytm, is also a stakeholder in Snapdeal.

Snapdeal and SoftBank declined to comment on the matter. The deal, if completed, would mark the biggest acquisition in the Indian ecommerce space and change the landscape of the sector that is witnessing intense competition among players.

The board of Jasper Infotech, the holding company of Snapdeal, met on Tuesday to brainstorm on the broad contours of a possible deal.

Sources said one of the hurdles is valuation, as Kalaari Capital and Nexus Venture Partners have not agreed with the valuation given by Snapdeal's largest shareholder SoftBank (See: SoftBank rift with Kalaari, Nexus threatens Snapdeal's future and Amid boardroom battle, SoftBank yanks Snapdeal fund offer)

NDTV says Tuesday's board meeting saw some progress in terms of a broad agreement emerging on the sale.

Snapdeal, once the second-biggest online marketplace in the country, was valued at $6.5 billion in its last funding round in February 2016, and was the only unicorn in India that remained unscathed in last year's markdowns by global mutual funds.

Now, according to a Business Standard report on the issue, the online marketplace might just manage to get less than a sixth of the valuation when it is merged with larger rival Flipkart. Sources said that the deal might happen within the next three weeks. The move, led by its largest investor SoftBank, could value Snapdeal at around $1 billion.

The cash-strapped firm over the last few months has had to trim its workforce significantly and shut down non-core businesses (Snapdeal axes 600; co-founders Bahl, Bansal take 100% pay cut ).

Kalaari Capital and Nexus Venture Partners, the two early stage investors in Snapdeal, want SoftBank to value not just the e-commerce company, but its two units - Vulcan Express and Unicommerce - with a higher valuation.

"Their argument is that Vulcan Express Private Limited and ecommerce management firm Unicommerce should be valued separately and not made part of Snapdeal's valuation as they are either profit making or would about to do so," one of Business Standard's sources said.

Both Kalaari and Nexus, among the early backers of Snapdeal, have vetoed SoftBank's proposal to value the ecommerce company between $600-800 million. SoftBank, which has written off the value of its investments in the company, is looking at a fire sale in exchange for equity in Flipkart, India's largest ecommerce firm that has revived to take on global rival Amazon.

The deal would lead to exit of the two founders - Kunal Bahl and Rohit Bansal - from Snapdeal, which started as a portal to offer discount coupons in 2000, before shifting to ecommerce.

SoftBank, which invested around $900 million in Snapdeal and is the major stakeholder in the company as well as digital payments platform Freecharge, is reportedly planning to invest around a $1.5 billion in Flipkart for a double-digit percentage stake in the Bengaluru based marketplace.

Paytm, which had done due diligence of Snapdeal earlier, is planning to make a bid on its own.

"Alibaba which was also part of a $600 million round in Snapdeal, wants an exit. Paytm already has the biggest online mobile wallet in the country and a revamped marketplace which the company is aggressively expanding," said the BS source.

Snapdeal, which has been struggling to raise funds from investors, went on a rationalisation spree in February, sacking employees, shutting down unprofitable divisions and offices to prepare itself for a sale.

Indian ecommerce companies have seen funding dry up over the last few months as investors are focusing extensively on profitability and rationalisation of expenses.