Softbank-backed ecommerce marketplace Snapdeal on Wednesday began a massive lay-off exercise of its employees across its business verticals. 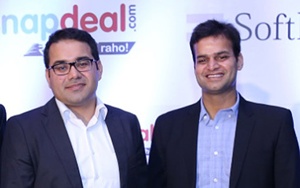 Although the company has not mentioned how many employees will be laid off, reports say over 600 people across Snapdeal, its logistics arm Vulcan, and FreeCharge, the digital payments business.

Co-founders of the company Kunal Bahl and Rohit Bansal have also announced that they will take a 100 per cent salary cut.

The company is estimated to have 8,000 employees on its rolls. More employees are expected to be laid off shortly.

In an email sent out to their employees, both the co-founders admitted that they have made some wrong decisions while executing their business. ''Over the last 2-3 years, with all the capital coming into this market, our entire industry, including ourselves, started making mistakes. We started growing our business much before the right economic model and market fit was figured out. We also started diversifying and starting new projects while we still hadn't perfected the first or made it profitable,'' Kunal and Rohit said in their letter.

Of late, the company has been struggling to raise funds to compete with its rivals Amazon and Flipkart in the Indian ecommerce market. The Jasper Infotech owned Snapdeal last raised funds in August 2016, when it received $21 million from Clouse SA. Key investors in Snapdeal include Softbank, Alibaba, eBay, Kalaari Capital and Ratan Tata.

The co-founders blamed themselves for the failure. ''Ambition is critical, because that's what motivates us to give our very best every single day – to achieve the undoable. However, a large amount of capital with ambition can be a potent mix that drives a company to defocus from its core. We feel that happened to us. We started doing too many things, and all of us starting with myself and Rohit, are to blame for,'' Bahl said in the letter.

Snapdeal is taking some tough decisions in reorganising the business into a leaner and focused enterprise in its journey towards becoming a profitable venture. ''We are combining teams, reducing layers, eliminating non-core projects and strengthening the focus on profitable growth,'' Bahl wrote.

Towards this goal, the company is saying goodbye to some of its employees. ''This is by far the hardest decision that we have ever taken in our lives. Our colleagues are our friends before they are co-workers, and I feel a deep sense of disappointment that we won't be able have them continue on this journey with us,'' Bahl said.

Snapdeal has made substantial upfront investments in building ecommerce infrastructure, such as marketplace, payments and logistics platforms. Snapdeal will further leverage these technology assets and realign its resources to become a leaner and more efficient business, the company said.

This comes after Snapdeal took measures to enhance efficiency, which led to its EBITDA increasing by 40 per cent in the first nine months of the current financial year. The initiatives have led to 35 per cent lower delivery costs, 75 per cent lower data hosting costs on account of Snapdeal's deployment of its private cloud solution, and 25 per cent lower fixed costs, Snapdeal said.

During the nine month period, its net revenues rose by 3.5 times. Building on all these gains, the company expects to be the first profitable ecommerce company in India within two years, it said. It also expects its logistics company, Vulcan Express, to turn profitable by the middle of this year. In addition to being Snapdeal's anchor logistics partner, it now services third-party clients as well.

FreeCharge CEO quits
The chief executive of Snapdeal-owned digital payment firm FreeCharge, Govind Rajan, has stepped down from the company. He spent barely nine months at the helm. The company confirmed the exit of Rajan, but did not offer any reason for his exit.

Jason Kothari, former chief executive of Housing.com, will now oversee the business operations of FreeCharge as part of his overall responsibilities of portfolio management as the chief strategy and investment officer of Snapdeal.