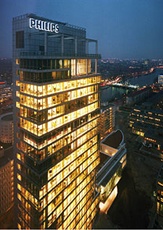 Bain Capital, CVC, CD&R, KKR & Co and Onex made indicative offers earlier this week, valuing the business at between €2.5 billion ($3.1 billion) and €3 billion, the report said.

Philips had announced last month that it plans to split the company into two, separating its healthcare-lifestyle and lighting businesses after it stripped off less profitable activities. (See: Philips to split company in two)

The Amsterdam-based company had added that details of how its lighting business would be split into a separate legal structure would be announced in 2015.

Philips has been seeking third-party investors for its lighting business but may opt to hold a minority stake in the business.

Philips has been a household name for around a century but in recent years it had stripped down its business to focus on lighting technology and on medical technology where margins were strong and competition from emerging markets limited.

The company last year announced the sale of its lifestyle entertainment segment, which makes stereos and DVD players, after it sold its troubled TV-making arm in 2012.

In June, the company said it planned to merge its Lumileds LED components and automotive lighting divisions into a standalone subsidiary which could potentially be spun off.