Mark Fields to succeed Alan Mulally as next Ford chief

With Ford Motor CEO Alan Mulally set to retire, chief operating officer Mark Fields is all set to take over. The younger but seasoned executive had been tipped to succeed Mulally in 2012 and has been waiting in the wings ever since. 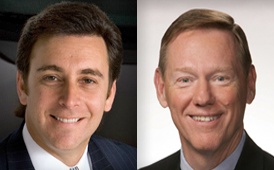 The formal announcement of the timetable for the transfer of power to Fields could come as early as 1 May, Bloomberg News reported yesterday.

The company created the No 2 job of chief operating officer after Fields was tipped for the top post in December 2012. The executive was tasked with the responsibility of managing Ford's day-to-day business.

Fields distinguished himself as chief of Ford's North and South American operations in 2005, after he turned around Ford's troubled operations in the US just as the recession hit the US economy. He helped convince Ford's US dealers to upgrade their dated facilities as Ford came out with fresh offerings to its lineup.

Fields, who graduated from Rutgers and went on to receive an MBA from Harvard, quickly acquired the reputation of being a tough, confident executive with a knack for turning around troubled businesses.

When Fields took charge of Ford Motor Co's Americas operations nine years ago, he set out to execute a major repair job amid record losses that almost dragged the company into bankruptcy.

The operations, last year earned record operating profit of $8.78 billion and profit margins above 10 per cent in an industry which considers 5 per cent as respectable.

Commentators say, Fields was set to take charge of the automaker in its prime, after Mullaly steered the company through the worst downturn in the industry's fortune, nursing Ford's return to profitability.

Ford earned $42.3 billion in the last five years after posting losses of $30.1 billion from 2006 to 2008. Ford sales in US shot 11 per cent last year driven by rising uptake of sport-utility vehicles Fusion and in China, the world's largest car market, Ford now outsells Toyota Motor Corp.

In his 25 years at Ford, Fields has worked several turnarounds for the company.

In 2000, at 39, he became CEO of Mazda Motor Corp, in which Ford then held a controlling stake.