Singapore-based commodities trader Trafigura Group Pte is in talks to buy a minority stake in Essar Oil Ltd, in a deal that could value India's second-largest private refiner at about $6.5 billion, Bloomberg today reported, citing people with knowledge. 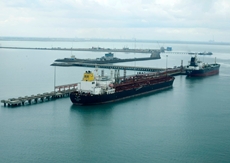 Trafigura is in talks to acquire a 15-per cent stake in Ruia brothers-run Essar Oil, and plans to reach an agreement by next month, the report said.

The Ruias are willing to sell a maximum stake of about 30 per cent of Essar Oil to Trafigura, and use the proceeds from the refinery stake sales to pay back bank loans.

As part of the deal, Trafigura could also get a stake in Essar's more than 2,000 retail fuel stations, a power plant and the Vadinar port, but Trafigura's main interest is Essar Oil's 405,000 barrel-a-day Vadinar refinery, the report added.

A successful deal would come a year after Russian state oil producer OAO Rosneft signed a preliminary agreement to buy a 49-per cent stake in the Vadinar refinery. (See: Russia's Rosneft to buy 49% stake in Essar oil refinery)

Vadinar oil refinery is one of the most complex refineries in the world, having a Nelson complexity index of 11.8, and is capable of refining heavy oil. The refinery has access to the deep-water port in Vadinar, which is capable of handling VLCC class tankers.

Mumbai-based Essar Oil also has over 1,400 Essar-branded oil retail outlets in various parts of India and about 600 more under various stages of commissioning.

The company plans to more than double the refinery capacity to 45 million tonnes per annum by 2020 and substantially increase its retail outlets to 5,000 in the next year.

Essar Oil is a fully integrated oil and gas company engaged in exploration, production and retailing owing a global portfolio of onshore and offshore oil and gas assets.

Founded in 1993, the Trafigura is one of the world's leading independent commodity traders, specialising in the oil, minerals and metals markets.

The company has an annual turnover of $S97.2 billion.