Germany says it will remain "watchful" of Chinese carmaker Geely after it became the biggest investor in Mercedes-Benz owner Daimler. 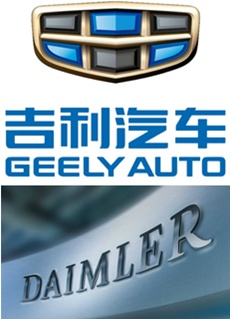 The German government warned the deal should not be used as a "gateway" for Chinese industrial policy interests.

Li Shufu, the founder and chairman of Zhejiang Geely Holding Group Co, has become the top shareholder in Daimler AG, the German company that traces its roots to Karl Benz.

The car industry is witnessing what Bloomberg calls one of its biggest disruptions since Benz assembled the first automobile more than a century ago. Li inherits a storied legacy with inventions such as the world's first diesel car.

The €7.3-billion ($9-billion) stake, disclosed on Friday and first reported by Bloomberg, represents the biggest investment by a Chinese company in an overseas automaker - and one right in the nerve centres of the global automotive world.

The move by the photographer-turned self-made billionaire comes at a time when battery-powered vehicles and self-driving automobiles are poised to herald a new era. Technology companies like Google and Apple Inc with vast financial resources are vying for a role in the world of automaking. To survive, traditional manufacturers can no longer go it alone, according to Li.

"Competitors that are challenging the global car industry in the 21st century technologically are not part of the automotive industry today,'' Li said in a statement. ''In order to succeed and seize the technology highland, one has to have friends, partners, and alliances and adapt a new way of thinking in terms of sharing and united strength.''

Li amassed a 9.7-per cent holding in Stuttgart-based Daimler through Geely Group, a company owned by the 54-year-old and managed by his carmaker.

Cooperation with Daimler, on areas such as new-energy vehicles and on-line services, is a core issue, Geely told Bloomberg News citing the chairman, in response to questions on the investment.

According to the BBC, Geely's investment has raised some concerns that the Chinese firm will seek access to technology and innovation in exchange for the deal.

The German government said it would not block the investment, but economy minister Brigitte Zypries said it must "keep an especially watchful eye".

Germany is "an open economy that welcomes investments, as long as they happen in line with the market", she told the German newspaper Handelsblatt.

China's car market has already surpassed the US. It is one area where local companies like Geely and Great Wall Motors Co are encouraged by the government to go overseas to secure key technologies and access to resources.

Chinese dealmakers in other areas are under intense scrutiny following a debt-fuelled global acquisition spree. HNA Group, the conglomerate that owns stakes in Deutsche Bank AG and Hilton Worldwide Holdings Inc, is unwinding its portfolio of assets. Last week, China's government temporarily took over Anbang Insurance Group Co, whose buying binge including properties such as Manhattan's Waldorf Astoria hotel has come to symbolize the overreach of the nation's debt-laden conglomerates.

Li, whose global empire has more than 70,000 employees, has no such troubles.

A surge in Chinese vehicle sales is poised to double profits at his Hong Kong-listed Geely Automobile Holdings Ltd. The company's shares jumped as much as 8.8 per cent Monday, giving it a market value of about $30 billion. The automaker had bank balances and cash of 20.8 billion yuan ($3.3 billion) as of June, according to its most recent financial report.

That should help Li plow money into the emerging world of battery-powered cars and new technologies. Geely, which is China's largest private automaker by sales, doesn't have any foreign carmaker as its partner. Daimler's Chinese partners include BAIC Motor Corp and Warren Buffett-backed BYD Co, both of which compete with Geely.

Geely financed the Daimler investment through a combination of debt, equity and financial instruments overseas and didn't use domestic funds in China, Chief Financial Officer Li Donghui told CCTV in an interview.

Electric vehicles is the new battle ground in China, where the government is actively pushing for the eradication of fossil-fuel powered automobiles by giving new incentives. China is already the world's biggest market for electric vehicles, and a region Daimler has targeted for growth.