Daimler AG is stuck with its remaining 19.9 per cent stake in the struggling auto maker Chrysler Holding LLC as talks with the majority shareholder Cerberus Capital Management LP have hit a snag because of what it called "exaggerated demands" by Cerberus.

Cerberus, the New York-based private equity firm that bought 80.1 per cent of Chrysler from Daimler in August 2007, wants Daimler to refund the entire $7.2 billion it paid for its stake, according to a Daimler spokesman, because "they say they didn't get what they thought they were buying." 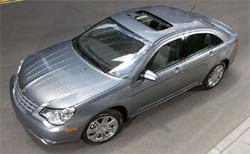 The negotiations between Daimler AG and Cerberus Capital Management LLC on the redemption of Daimler's 19.9 per cent shareholding in Chrysler Holding LLC (Chrysler) and other issues related to Cerberus's investment in Chrysler have been made considerably more difficult during the last weeks due to exaggerated demands by Cerberus.

''These demands by Cerberus exceed the value of Cerberus' investment in Chrysler. For the acquisition of an 80.1 per cent stake in Chrysler, Cerberus had invested $7.2 billion. The claims made now go beyond the framework of the contractually agreed possible obligations under representations and warranties,'' Daimler said in a release.

Daimler wants to delink with Chrysler as it continues to weigh on its earnings, erasing 373 million euros ($483 million) from second-quarter profit.

Daimler bought Chrysler in 1998 for $36 billion and sold a majority holding to New York-based Cerberus in August 2007 as losses mounted. The remaining stake was assigned a book value of zero in a third-quarter earnings report released on 23 October.

''The new claims also include an allegation of conduct outside the ordinary course of business by Daimler during the time between signing and closing of the transaction as well as the allegation of incomplete information about the business,''  the release said.

Daimler has rejected these ''absurd allegations'' and the claims derived therefrom as being completely without substance, the release noted.

Daimler's separation from Chrysler would make possible a merger or sale of the Auburn Hills, Michigan-based company. Cerberus had also been in talks with General Motors Corp about a potential merger.