Coca-Cola Co yesterday said that it will acquire a 10-per cent stake in Green Mountain Coffee Roasters Inc (GMCR), for $1.25 billion – a deal that will see the world's largest beverage company sell its single-serve cold beverages on the US coffee brewer's popular Keurig pod-based system. 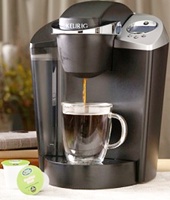 Under the terms of the deal, Coca-Cola will buy about 16.7 million new shares in Green Mountain for about $1.25 billion. The shares were priced at $74.98 each, which represents a trailing 50-trading-day volume weighted average price for the last 50 days.

GMCR will be Coca-Cola's exclusive partner for the production and sale of Coke's single-serve, pod-based cold beverages.

GMCR's Keurig Cold single-serve beverage system, which is being developed, is expected to be launched in 2015.

The cold system is expected to be a similarly open-architecture platform like the Keurig hot system.

Vermont-based GMCR intends to use a portion of the proceeds to fund capital expenditures for its Keurig Cold beverage system over the next several years.

''With The Coca-Cola Company as a global strategic partner in our multi-brand at-home Keurig Cold beverage system, we believe there is significant opportunity to premiumize and accelerate growth in the cold beverage category by empowering consumers with an innovative, convenient way to freshly prepare their favorite cold beverages at the push of a button,'' said Brian Kelley, president and CEO of GMCR.

''By pairing The Coca-Cola Company's brand leadership and global footprint with GMCR's innovative technology, together we will be able to capitalise on the many exciting growth opportunities in the single-serve, pod-based segment of the cold beverage industry,'' said Muhtar Kent, chairman and CEO of Coca-Cola.

GMCR is a leader in the specialty coffee industry in North America, well-known for its award-winning coffees and innovative brewing technology.