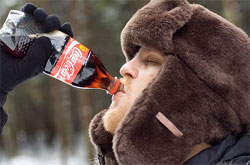 The acquisition of Nidan Soki, if it comes through, would catapult Coca-Cola to the No 1 spot in the Russian juice market overtaking its arch rival Pepsi, which owns a 75.5-per cent stake in Russia's largest juice maker, Lebedyansky.

The UK-based Lion Capital had acquired a 75-per cent stake in privately held Nidan in 2007 for an undisclosed sum, which analysts had estimated at $500 million.

The investment fund had been looking to off-load its stake since November and apart from Coca-Cola those said to be interested in the acquisition are Wimm-Bill-Dann and Russian brewing company Baltika, news daily Kommersant said yesterday citing a source close to Nidan.

The Moscow-based daily said that Coca-Cola appears to be the most likely buyer and it has already conducted due diligence on Nidan, which has sales of approximately $300 million annually.

Moscow-based Nidan is the fourth largest juice maker in the estimated $3 billion Russian juice market and has a market share of about 17 per cent in Russia and 43 per cent in the Siberian region.