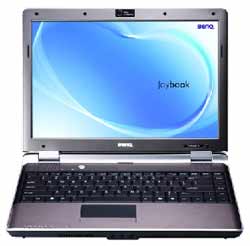 BenQ's exclusive Laminated Color Metal and POP art technologies allow the depiction of various designs on the Joybook's metallic cover, giving it a trendy and modern look. The sleek silver strip perfectly compliments the smooth surface. The contemporary and designer look of the Joybook is adorned by a fine aluminum hairline finish palm rest.

The laptop is supported by the nVIDIA GeForce 8600M GS graphic chipset and up to 1GB of TurboCache support. The laptop offers a superior visual performance and renders the most intense 3D effects.

The S41 Joybook is equipped with a 1.3 megapixel QEye webcam, an internal microphone with noise suppression, echo cancellation functions and cinema-class audio performance through its dual 1.5W speakers enhanced by SRS TruSurround XT technology. It also comes pre-equipped with integrated wireless WAN, 802.11a/b/g/n wireless LAN and built-in Bluetooth® 2.0. for easy connectivity with a wide range of networks and peripherals.

It is expected to be priced at Rs. 47000/- and will be available only in Delhi and Chennai as a part of test-marketing strategy.