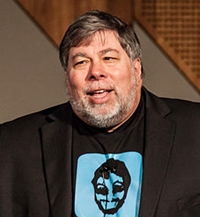 He told the BBC he doesn't like the idea that Apple does not pay tax at the same rate he does personally.

Apple, Google and Amazon have been criticised for not paying enough in tax and the firm is currently the subject of a European Commission tax inquiry.

Wozniak, who left Apple in 1985, was also ambivalent at the prospect of the UK leaving the European Union.

Wozniak - widely known as Woz - founded Apple along with Steve Jobs and Ronald Wayne 40 years ago. It has grown to become one of the most valuable businesses in the world, worth around $600 billion.

He told BBC radio, "I don't like the idea that Apple might be unfair - not paying taxes the way I do as a person.

"I do a lot of work, I do a lot of travel and I pay over 50 per cent of anything I make in taxes and I believe that's part of life and you should do it."

When asked if Apple should pay that amount, he replied, "Every company in the world should."

He said he was never interested in money, unlike his former partner Steve Jobs. "Steve Jobs started Apple Computers for money, that was his big thing and that was extremely important and critical and good."

Apple channels much of its business in Europe through a subsidiary in the Republic of Ireland, which has a corporation tax rate of 12.5 per cent compared to the UK's 20 per cent.

In the US it's 35 per cent, but three years ago the company admitted two of its Irish subsidiaries pay a rate of just 2 per cent. It has built up offshore cash reserves of around $200 billion - beyond the reach of US tax officials.

Tax avoidance has been brought back into focus by the recent Panama Papers revelations.

Wozniak said, "We didn't think we'd be figuring out how to go off to the Bahamas and have special accounts like people do to try to hide their money.

"But you know, on the other hand I look back any company that is a public company, its shareholders are going to force it to be as profitable as possible and that means financial people studying all the laws of the world and figuring out all the schemes that work that are technically legal. They're technically legal and it bothers me and I would not live my life that way."

'Don't care about Brexit'
The UK should be free to exit the European Union, Wozniak added.

"I don't care. I think that all the states of Europe - it's better if you have very easy transportation - like movement from one to another to another," he said.

"Like we drive in the US from 50 individual states that all have their own laws and customs and typical types of people - you just drive through, and there are no customs hang-ups or anything ...

"I'm not against secession. If a state wants to leave the union let them leave. I don't think we should have even fought our civil war, we should have let the states leave."

Apple's cyber scrap
Wozniak, who was speaking at the Business Rocks technology summit in Manchester, backed Apple over its recent tangle with US authorities over access to data: "Apple has been the good guy.

"There are politicians who do not have a clue as to what cyber security is all about trying to pass laws saying that Apple has to make a product less secure.

"Why? That's a crime. That is just so horrible. I just cry! Why would Apple do it for such a weak case where the government were not going to get any valuable information at all - it's impossible."