Apple chief executive Tim Cook has lashed out at politicians who claim the company is avoiding tax in the US, slamming the accusations as "political crap". 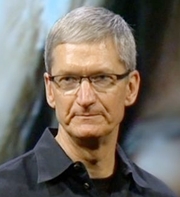 In an interview with CBS's '60 Minutes', Cook said the company keeps its overseas revenue outside the US because the country's "industrial age" code would force Apple to pay 40 per cent tax to bring that revenue home.

Critics have long targeted Apple for its revenue practices. An October report from Citizens for Tax Justice revealed Apple keeps more of its profits offshore than Google and Microsoft combined.

Apple holds $181.1 billion in taxable income overseas, by far the highest amount any US company holds outside the country.

Cook said that two-thirds of the company's revenue comes from foreign countries and the company keeps that money in its foreign subsidiaries. He attacked members of Congress who suggested the practice is part of a scheme to avoid paying tax.

"That is total political crap. There is no truth behind it. Apple pays every tax dollar we owe," he said. "We pay more taxes in this country than anyone."

The Citizens for Tax Justice study showed Apple would owe $59.2 billion in taxes were it to move its overseas income to the US.

The CEO also slammed the tax code, saying that it was no longer relevant to the needs of today's world. "This is a tax code, Charlie, that was made for the industrial age, not the digital age," he said. "It's backwards. It's awful for America. It should have been fixed many years ago. It's past time to get it done."

It's not the first time Cook has criticized the tax code. In a May 2013 Senate hearing, Cook said that he would like to bring Apple's revenue back to the US, but the high corporation tax means it would not be worth it.

Protecting privacy
On another issue, Cook said his stance on letting the government have a window into its customers' private communications has not changed since the Paris attacks.

Unless served with a warrant, private communication is private and a back door for the government for national security is not the solution.

"There have been people that suggest that we should have a back door. But the reality is if you put a back door in, that back door's for everybody, for good guys and bad guys," he said.

"I don't believe that the trade-off here is privacy versus national security. I think that's an overly simplistic view. We're America. We should have both," asserted Cook.