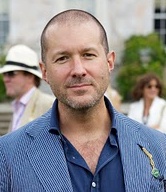 UK technology guru and legendary senior designer Sir Jonathan Ive has been promoted to Apple's chief design officer, from senior vice president. The fifth generation iPod was among one of Ive's most recognised industrial designs.

Sir Jonathan, confirmed the promotion in an interview with writer, actor and presenter Stephen Fry for the Daily Telegraph.

Known as Jony, Sir Jonthan had been behind of some of the best-loved gadgets of modern times and is widely credited for his role in turning around the company's fortunes.

The designer, from Chingford in north-east London, had been instrumental since the mid-1990s and, alongside Apple founder and CEO Steve Jobs, in bringing back the company from the brink of financial ruin.

Sir Jonathan was made a Knight Commander of the Order of the British Empire (KBE) in 2012 for services to design and enterprise.

At the time he said regarding the impact of his products on the modern world: "We don't really spend much time thinking about our impact. We are fully consumed with trying to make the very best products that we can."

"The new Chief Design Officer title is a symbolic gesture recognizing his strategic importance to Apple's future," Neil Cybart, an independent analyst and founder of the Above Avalon website covering Apple's business, said yesterday in an e-mail.

"In many ways, Jony's new role is the closest thing yet to the unofficial role that Steve Jobs held at Apple. With day-to-day managerial duties being handed off to capable team members, Jony now has more time to focus on the big picture, although history would suggest he will remain quite involved with the details."