Despite being an icon of the digital age, Steve Jobs harboured worries about the effect of the technology on children, The New York Times reported. 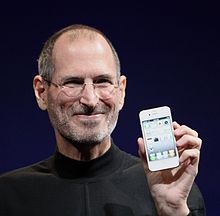 Even as Apple plied tech hungry millions with a line of pricey gadgets pitching them as must-buys, and in the process, turning a company on the ropes into a powerhouse, Jobs kept his own children from using iPads and also limited their access to internet, the report said.

To many people from the tech generation that might be difficult to believe, but Jobs' children would instead sit around a long dinner table in the kitchen and actually talk to one another.

The shock revelation that Jobs' kids were not supremely tech-savvy comes from NYT's technology and business columnist Nick Bilton, who recalled a conversation with the Apple co-founder in 2010, a year before he died.

Bilton had come to meet Jobs after he had written about a perceived failing of the iPad, which had just gone on sale.

Bilton, said that "after he had finished chewing me out" he had been shocked by Jobs' response to a question that was mainly designed to change the subject.

Bilton asked Jobs, a question about his kids liking the iPad, which was actually meant to change the subject. Jobs replied that the kids had not used it.

''We limit how much technology our kids use at home," Jobs said matter of factly.