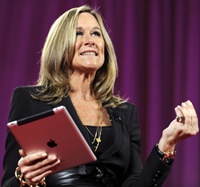 In a move that signals the coming fusion of fashion with technology, Apple late Monday night announced it had hired fashion house Burberry's CEO Angela Ahrendts for a newly-created senior vice president position on the executive team.

Ahrendts, 53, will take over the assignment from spring 2014, and report directly to Apple CEO Tim Cook. She would have oversight of the company's online and retail stores.

With the appointment, Ahrendts becomes the first female executive to join the Apple board.

Ahrendts, a fashion industry veteran, before becoming the CEO of Burberry in 2006, was the executive vice president at Liz Claiborne and earlier, president of Donna Karan International.

In September, Apple and Burberry collaborated when iPhone 5s phones were used to snap photos at a runway show.

However, Ahrendts is not the first fashion executive to join Apple this year. The iPhone maker hired Yves Saint Laurent CEO Paul Deneve, earlier this year to work on "special projects."

Rumour has it that the special project is Apple's iWatch or smartwatch, and that, according to industry experts, was the reason Apple seemed to be poaching such high profile fashion executives.

Though no comment has yet been forthcoming from  Apple about the smartwatch reports, Apple CEO, Tim Cook had publicly stated that the wrist was an "interesting" and "natural" spot for a wearable devices.

Apple's brick-and-mortar stores are known for the revenues they generate, the company, however was now making its online stores just as successful with some help from the world of high fashion.

Ahrendts turned Burberry around from near oblivion into a symbol of global luxury.

Her mandate at Apple would involve the revamp of both Apple's physical and online stores so they were equally admired.

''I have wanted one person to lead both of these teams for some time,'' Timothy D. Cook, Apple's chief executive, said in an internal memo to employees that was leaked on the Web, ''because I believe it will better serve our customers, but I had never met anyone whom I felt confident could lead both until I met Angela.''