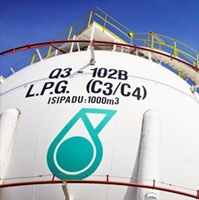 Under the deal, IOC will buy a 10-per cent stake in the Canadian shale-gas assets of Calgary-based Progress Energy, and 1.2 million tons offtake of LNG per annum, or 10 per cent of the Pacific Northwest LNG project's production, for a minimum period of 20 years.

In December 2012Petronas Carigali Canada Ltd, the Canadian subsidiary of Petronas, had acquired Progress Energy for $5.4 billion in a in a high-profile transaction that had been initially blocked by the Canadian government.

The deal gave it unconventional natural gas resources in northeast British Columbia and northwest Alberta. Petronas got approximately 900,000 net acres of Montney rights over its entire British Columbia and Alberta land base, making it one of the largest Montney land rights holders.

Three months after Canadian regulators approved the Petronas-Progress deal, the Kuala Lumpur-based company sold 10-per cent stake in its Pacific Northwest LNG project and a 10-per cent stake in a shale gas field in the North Montney to Tokyo-based Japan Petroleum Exploration for an undisclosed sum, and in December 2013 sold 3 per cent to Petroleum Brunei.

Petronas, one of the world's largest producers and shippers of super-cooled LNG fuel, needs money to fund its proposed $20 billion Pacific Northwest LNG project, which will liquefy and export natural gas produced by its gas fields in Montney region and northwest Alberta to energy starving Asian nations.

It is said to have already invested between $9 billion-$11 billion in the LNG project, comprising two plants with an annual capacity of 6 metric tons each and is investing another $5 billion on a 750-km pipeline, which will supply natural gas from the production fields to the two plants.

Petronas has been trying to offload 50 per cent of the company in order to fund this project. The company's vice president global LNG Adnal Zainal Abidin told reporters in early 2013, ''We are talking to several possible partners as we want to share our project risk."

Post the IOC transaction, Petronas will hold 77 per cent of the Pacific Northwest LNG project, which is expected to produce around 19.68 million tonnes of LNG a year for 25 years starting in 2018.

Apart from the sale to IOC, Shamsul Azhar Abbas, president and CEO of Petronas, had last month said that the company was close to finalising the sale of another 15 per cent to an Asian buyer.

Although he did not disclose the name of the Asian buyer, several reports had speculated that China Petroleum and Chemical Corp, known as Sinopec, was the unnamed buyer.