OIL, IOC acquire 30 per cent in Carrizo's shale gas assets in US for $82.5 million

State-owned Indian Oil Corporation Ltd (IOC) and Oil India Ltd (OIL) have jointly acquired a 30-per cent stake in the shale gas assets of Carrizo Oil and Gas Inc in Colorado, US for $82.5 million (about Rs428 crore). 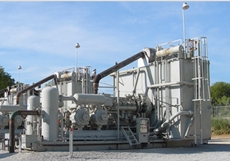 This is OIL and IOCL's first shale acquisition in the United States.

The two companies will together receive a 30-per cent interest in Carrizo's existing production of about 1,850 barrels of oil-equivalent a day from 24 gross wells.

While OIL has acquired 20 per cent, IOC has taken a 10-per cent stake in Carrizo's Niobrara basin acreage assets through their wholly-owned US subsidiaries - Oil India (USA) Inc and IOCL (USA) Inc respectively.

"The total consideration is $82.5 million consisting of an upfront cash payment of $41.25 million and the assumption of $41.25 million of Carrizo's future drilling and development costs," OIL director (finance) T K Ananthkumar said.

The investment is linked to Carrizo's future drilling and development cost, the companies said in a statement.