As one might expect, the new Alto K10 is a considerable update on the standard 800cc Maruti Alto. But how much better is it? 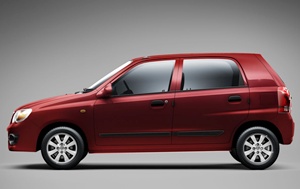 For one thing, the K10 looks bigger and more mature. Costing a shade more than the standard Alto, it is another option for buyers looking for small cars. Look closely at the car, or at the dimension column in the specification chart, and the Alto K10 is bigger. It also looks different, and decidedly more sporty.

Drawing attention is the frontal treatment that includes angular headlamps set partly into the bumper (fender). The bigger, more assertive grille is a part of the beefier bumper. The fog lamp recesses at the lower corners of the bumper have been redesigned, and show a mature and confident look.

It is longer than the Alto. The engine compartment has been elongated to accommodate the new, more powerful K-Series engine. The slight increase in the front overhang also gives good results. While the sides do not highlight any change whatsoever, it is the rear, with more assertive tail lamps, that looks different. Extending a new found proportionality to the Alto's appearance, the Alto K10 stands out in a subtle, non-intrusive manner.

Inside, the first thing to draw attention is the new, grippy steering wheel, redesigned instrumentation, and a new seat fabric dominate. A basic feel of the old Alto does continue to show itself despite the changes. The quality of plastics is decent, and the amount of space available nearly the same as in the 'conventional' Alto.