Rolls-Royce, for long considered the ultimate in luxury cars, on Friday unveiled the company's new four-door super-luxury saloon 'Ghost' in New Delhi. The company is hoping to sell around 60 units of the Rs2.5 crore-plus model in 2010, when it makes debut in India.

Rolls-Royce, the UK-based manufacturer who is now part of Germany's BMW, unveiled the new range as it attempts to break away from the ''very formal'' chauffer-driven image of the company's Phantom brand. 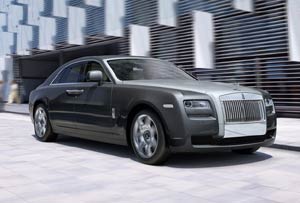 The company has also lowered the threshold for owning a Rolls Royce, considering that the Ghost will be the cheapest Rolls so far. The Phantom range comes upwards of Rs3.5 crore.

This year the company expects to sell only 15-80 cars, but hopes to ramp up this figure to about 75 next year with the new launch.

"Ghost is a more informal design that broadens the appeal of Rolls-Royce, combining refinement, new technology, and contemporary style. It bears all the hallmarks of other Rolls-Royce cars, using the finest wood and leather materials and employing manufacturing standards which are no different to Phantom. Ghost will be built-to-order,'' Colin Kelly, regional director for the Asia Pacific region, said.

The Ghost's power train comprises a 6.6 litre twin-turbo charged V12 engine and a new eight-speed automatic gearbox. It delivers a peak power output of 563bhp at 5250rpm, racing from 0-100kmph in 4.9 seconds.