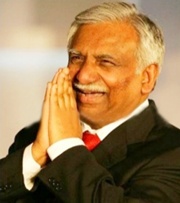 Jet Airways' main promoter and chairman Naresh Goyal has pledged his entire stake in the carrier of 51 per cent, valued at over Rs2,600 crore, to state-run Punjab National Bank.

The airline, in a regulatory filing on Monday evening, said Goyal has pledged his entire 57,933,665 shares constituting 51 per cent holding in the airline effective 8 January to PNB with a "non-disposal undertaking". The reason for pledging of shares was not disclosed.

The Emirates-based Etihad holds 24 per cent stake in Jet as a strategic partner while the remaining shares are owned by institutional and retail investors. The carrier, whose share price today soared by over 5 per cent to Rs464.25 apiece, has a total market value of Rs5,274 crore.

The loss-making airline is saddled with a debt of Rs9,794 crore as of the September quarter, down 7 per cent from Rs10,576 crore as of March 2014. This has helped it cut its interest burden 15 per cent to Rs212.27 crore during the second quarter of the fiscal.

In the September quarter the airline, which had from 4 December discontinued its low-cost brand JetLite, had reported a 96 per cent reduction in net losses on a one-time income by way of sale of JPmiles to Etihad.

A one-time income of Rs305 crore from sale of its loyalty programme to equity partner Etihad helped Jet Airways slash losses to the tune of 95.7 per cent at Rs43 crore in the three months to September. The airline had reported a whopping Rs999 crore net loss in the same period a year ago.

For the first time since 2012, the Naresh Goyal-promoted airline, however, on a standalone basis flew back into profit with a net profit of Rs69.82 crore helped by the one-time income, the airline said in a release. Consolidated income rose 13.7 per cent to Rs5,092 crore during the quarter as against Rs4,480 crore a year ago. Stand-alone income jumped 16 per cent to Rs4,772 crore from Rs4,101 crore, the airline had said.

The Mumbai-based full service carrier has 113 planes in its fleet, of which 26 are owned by the carrier and the rest 87 are leased.