Lufthansa set to cancel over 1,200 flights worldwide as strike by cabin crew escalates 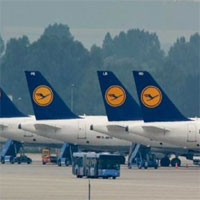 German airline Lufthansa, which was forced to cancel around 350 flights on Tuesday ahead of a planned 24-hour strike by cabin crew at six major airports on Wednesday, is planning to cancel two-thirds of its total 1,800 flights as the strike escalates.

While domestic and European services were the primarily target of the strikers, a number of intercontinental flights were also cancelled, the airline said in a website release.

Deutsche Lufthansa AG, Europe's second-largest airline, has cancelled flights to New York and Hong Kong. The airline also announced the cancellation of its flights from Delhi, Mumbai, Bangalore and Chennai, scheduled to leave on 7 September.

Lufthansa may be headed for more trouble as the pilots and ground crew prepare for prolonged industrial action over the planned cost-cutting measures by the airline.

A planned strike by flight attendants at three major German airports alone resulted in Lufthansa cancelling over 300 flights on Tuesday.

Flight attendants went on strike on Wednesday morning in Frankfurt and Berlin and walked out in the afternoon at Munich, according to the Unabhaengige Flugbegleiter Organisation.