In 1965, a renowned Princeton University physicist theorised that ferroelectric metals could conduct electricity despite not existing in nature. 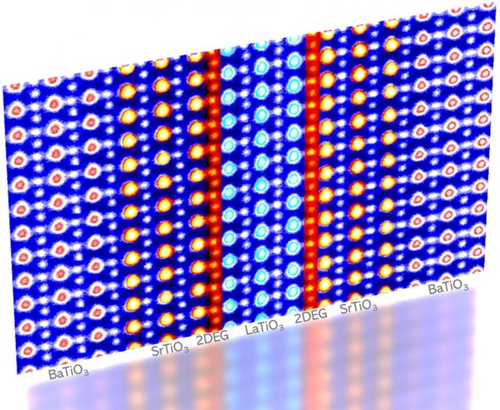 For decades, scientists thought it would be impossible to prove the theory by Philip W. Anderson, who shared the 1977 Nobel Prize in physics. It was like trying to blend fire and water, but a Rutgers-led international team of scientists has verified the theory and their findings are published online in Nature Communications.
"It's exciting," says Jak Chakhalian, a team leader of the study and Professor Claud Lovelace Endowed Chair in Experimental Physics at Rutgers University-New Brunswick. "We created a new class of two-dimensional artificial materials with ferroelectric-like properties at room temperature that don't exist in nature yet can conduct electricity. It's an important link between a theory and an experiment."
A cornerstone of technology, ferro-electric materials are used in electronics such as cell phone and other antennas, computer storage, medical equipment, high precision motors, ultra-sensitive sensors and sonar equipment. None of their materials conducts electricity and the Rutgers-led findings potentially could spawn a new generation of devices and applications, Chakhalian said.
"Ferroelectrics are a very important class of materials technologically," he says. "They move, shrink and expand when electricity is applied and that allows you to move things with exquisite precision. Moreover, every modern cell phone has tens of components with properties similar to ferroelectric material."
Like many physicists, Chakhalian relishes a challenge and he could not find a law of physics that says ferroelectric metals could not be created. So his team, including study lead author Yanwei Cao, a former doctoral student who is now a professor at the Chinese Academy of Sciences, tapped Chakhalian's state-of-the-art tools to create sheets of materials only a few atoms thick. It's like making sandwiches, Chakhalian said.
"When a material becomes ferroelectric, its atoms shift permanently and we wanted to add metallic properties to an artificial crystal that conducts electricity," he said. "So we took two very thin layers to create a two-dimensional metal at the interface and added a third layer with special properties to shift the atoms in that metallic layer, creating a ferroelectric-like metal. The new structure has several functionalities built-in, and this is a big win-win."
MORE REPORTS