A team of US scientists has suceeded in decoding the structure of an entire HIV genome for the first time, which will give the world a better insight into the viruses that causes AIDS in humans. 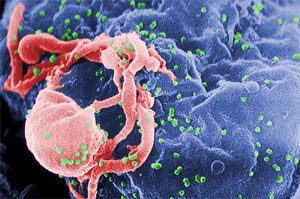 Researchers at the University of North Carolina at Chapel Hill decoded the complex HIV genome, the results of which, will have widespread implications for understanding how exactly the virus infects humans.

The study, published in Nature, also opens the door for further research for accelerating the development of antiviral drugs.

Kevin Weeks, Ph.D., a professor of chemistry in UNC's College of Arts and Sciences who led the study, said prior to this new work researchers had modeled only small regions of the HIV RNA genome. The HIV RNA genome is very large, composed of two strands of nearly 10,000 nucleotides each.

By mapping the genetic structure of the virus, scientists will be able to develop more effective drugs to treat HIV, said Weeks. If replication of the virus is stopped or curtailed, there may be a possibility to even attack the virus before it gets an opportunity of sitting idle in the human body.

HIV, like the viruses that cause influenza, hepatitis C and polio, carries its genetic information as single-stranded RNA rather than double-stranded DNA.