A new device that can transform breath into words could allow paralysed people to regain the power of speech. 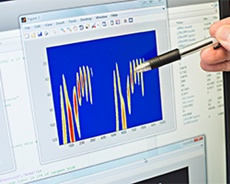 Experts at Loughborough University are developing speech analysis software which could be programmed for interpreting a person's pattern of breathing, and then turn it into words.

The device which comprises a breathing mask connected to a computer could bring hope to those suffering from severe speech loss, the system's developers said.

Current technology for people suffering from paralysis which allowed 'speech' requires the user to be able to blink or sniff.

But the new gadget interpreted changes in the way a person breathed, then transformed the patterns into language on a linked voice synthesiser machine.

the researchers hope affected persons would be able to  create their own language, by varying the speed of their breathing, and then programming the device to match different patterns to individual words or phrases.

"The intention is that the user will work with the computer, in order to develop their own communication language,'' says David Kerr, senior lecturer at the university's School of Mechanical and Manufacturing Engineering.

"You can associate your own particular breath pattern with whatever word or phrase you want and gradually build up a language or lexicon of phrases and words that the computer can recognise and turn into speech.

''What we are proposing is a system that learns with the user to form an effective vocabulary that suits the person rather than the machine.''

The Augmentative and Alternate Communication (AAC) device, as the system is called had so far had a 97.5 per cent success rate at teaching the system to recognise words and phrases presented as "breath signals."

"This device could transform the way people with severe muscular weakness or other speech disorders communicate," says Dr Atul Gaur, a consultant anesthetist who is collaborating with the Loughborough team.

"In an intensive care setting, the technology has the potential to be used to make an early diagnosis of locked-in syndrome (LIS), by allowing patients, including those on ventilators, to communicate effectively for the first time by breathing – an almost effortless act which requires no speech, limb or facial movements."