Tributes from a soldier's daughter to the armed forces

Diksha Dwivedi, 27, is the founder and managing director of YOSO Media Pvt Ltd and author of Letters from Kargil. She had earlier founded akkarbakkar.com, India's first open storytelling platform, and has been editor-in-chief of shareable content platform FilterCopy.

After an economics degree from Delhi's Shri Ram College of Commerce and a master's in journalism from Cardiff University, Dwivedi works with the best startups and ideas around the world to make them thrive faster through storytelling. In her free time, She talks about the Indian army, women founders, startups and passion and dreams.
In this interview with Swetha Amit,  Dwivedi  narrates her life as a daughter of a soldier, the journey of penning down her book and her learnings from. 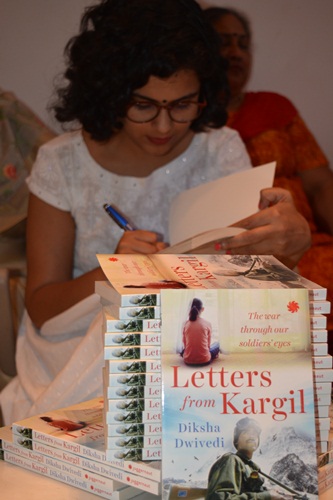 Writing Letters from Kargil, which delves deep into the minds of soldiers, particularly the martyrs of the Kargil war, must not have been easy. How did you go about the entire process?
When I decided to write the book, I had no idea how the whole thing would pan out but I've always been a yolo [you only live once] kind of a person. Luckily for me, the opportunity came to me rather than the other way around. Priya Ramani, a renowned journalist who'd just joined Juggernaut in 2016 had read a story I had written about my father and a conversation with her turned into this book that I call my first. I first pounced at the opportunity of writing a book about a war that my father fought and while staring at the blank white google doc on my laptop, I eventually figured how to actually dive into the subject. That's when I picked up my phone, made a few calls, got a few numbers and started making the most difficult calls of my life. I spoke to families and got letters that were the foundation of my book. After that I just had to connect the dots. I believe that it's the letters that really told the story. I just acted like the mediator between the letters and its audience. In all, I took six months to turn an idea into a book.
Tell us more about your childhood. How did you adjust to the constant moving that is typical of army life and with your father being away at the war front?
Moving homes is an eternal part of a fauji kid.  I don't think anyone realises how painful it is for us as children until we experience a normal life where we have a permanent home address. Separation is equally painful. When I was 8, the memory of my father was that we had very little time with him in a year. So, we would spend it in the best possible way every time we met him. I think he also realised the same because whenever he was home for vacations or when we went to see him in Srinagar, he spent quality time with us. He cooked, played and generally had a lot of fun with us.  He was a funny man and he made sure that we remembered his humorous side forever. As an 8-year-old I don't think I ever got down to "dealing" with being far away from him. This was because he ensured that whenever he was around, he made up for the time he was absent in our lives. I can go to the extent of saying that he left me with enough love and memories to last me for a lifetime.
You have talked about freezing that moment in the summer of 1999 when your father was summoned for the war, in your book. If there is one thing that you could go back in time and change, what will it be?
Yes, every time I read his letters I feel like freezing those times in 1999. Just like how every other family felt when I spoke to them for the book. It's a pretty helpless feeling. If I could go back in time and change one thing, I'd say I'd have wanted to be old enough then to have a drink with him and show him off to my friends. And reply to all his letters! Other than that, I don't think I'd change a thing about how life panned out for us. I don't think I'd say I'd have stopped him from going to war, I don't think any of us would've done that — my mom, sister or myself. 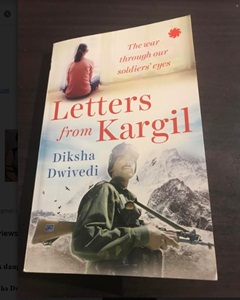 The letters showcased in your book were of an era where there were no mobile phones or social media platforms. Do you think communication been the soldiers and their families has become relatively easier now with the advent of technology?
Definitely. You have WhatsApp, FaceTime and emails now! Yes, the conditions in Kargil will still not allow most of this communication. However, the situation today is way better because news and messages can travel way faster. And that matters because you can stay in touch more often. However, I'm not sure if that's a good thing. You'd rather be the first one to get the news about your loved one than watch it on TV or the internet. There is always going to be a dilemma in my mind for this reason because real-time reporting didn't really help anyone in 1999.
On that note, your book talks about the letters written to you from your dad. What was your reaction as a little girl of 8 when you would receive a letter from your father?
To be honest, I don't think I even read the letters clearly when I was 8. My attention span was low and I could hardly speak in English. What I do remember though are the notes he left for us before leaving home for field after his holidays. Those notes were easy to read and informative too. Like: "Brush your teeth before sleeping" and "study hard, play harder". My father wrote "snackable content" for us in that age and those notes used to definitely cheer me up. They made me feel responsible because they felt like tasks that needed to be completed before we saw him again. I still read those notes sometimes and feel amazed at how he was ahead of his times in many ways.
Your book has been an eye opener in many ways, as readers get a glimpse of what goes on in army life. Why do you think that many others have not written books about our armed forces?
Many books have been written about our armed forces, actually. It's just that the angle to showcase the human side of soldiers is something that's not been explored enough. I don't think we realise in our everyday life how important empathy is as an emotion and that's really my only weapon when I write. I just tried to use that to tell my father's story and many stories like his.
Our soldiers thrive in brutal conditions and are away from their families most of the time. What keeps them motivated during such times?
I've covered this extensively in my book — what keeps them motivated. I will leave this as a cliff-hanger for your reader.
Penning down such a powerful book can be a life altering experience. What were your learnings from it?
I learnt that that being an author was a very respectable profession in our country. We don't value it enough as writers. And we as a society really underestimate the power of words.
What are your future plans? Any more books in the pipeline?
Definitely! My next book is inspired by my journey as a woman entrepreneur in India. I've been writing this book in my head for four years now. No plans of releasing it yet. I'll wait for the right time and the best publisher to support this story. Until then, I'll keep building my company to arrive at a happy ending for my second book.
(Also see: Excerpt from Letters from Kargil)
MORE REPORTS