Sita's Sister: a most unusual theme

Kavita Kane is the best-selling author of Karna's Wife: The Outcast's Queen, Sita's Sister', Menaka's Choice and 'Lanka's Princess. She started her career as a journalist and is now a full-time novelist.  A post graduate of English literature and mass communications, she proclaims herself as a self-confessed aficionado of theatre and cinema. She lives with her family in Pune. In this interview with Swetha Amit, she talks about writing on unusual characters from the epics, her take on Dharma and resilience in general.

You have authored four books on some interesting yet less pertinent characters from Ramayana and Mahabharata. What inspired you to venture into mythology?
I look at mythology as a canvas to contemporary thought and issues - power, corruption, intrigue, love, hate, jealousy, insecurity. Nothing has changed except the time. Mythology is not just a compilation of ancient stories, its lessons on man and his follies and fallacies. And that is what I found intriguing about this genre. That you can retell stories of old through contemporary thought.

Your book Sita's Sister is quite striking as not much is known about the character of Urmila. How challenging was it for you to bring in details about such a character who was not so prominent in the epic that we grew up reading? How did you go about the entire process?
There was nothing about Urmila but for a sketchy four-line mention and I almost gave up. I started with Karna's Wife instead. After its success, I got the courage to start afresh as her [Urmila's] character was so enigmatic that I had to persist. That's how and when Sita's Sister came about. It was not about Ram and Sita's and Lakshman's exile but Urmila's private exile in the palace as she journeys through despair without losing hope or losing herself to tears and self-pity. Those 14 years are her years of enlightenment and achievement, too.

A particular chapter in Sita's Sister brings out the aspect of being 'Mangalik' which is considered inauspicious. Sometimes even the most pragmatic and modern people tend to get carried away by this phenomenon of horoscopes and astrology. What is your take on this?
I guess all of us are superstitious in one way or the other. Fear and circumstances makes us so. So, it's not fair to be judgmental about this. A person in crisis wades through these very delicate assurances and that is his way of facing and living through the moment. Horoscope and astrology is as ambiguous as astral connections, super nature and aliens and whether one believes or not is upto the person entirely.

Sometimes in the quest of performing our duty or 'Dharma' as it is termed, a wrong is also done simultaneously if you look at the story of Ramayana or Mahabharata. Can any instance be fully right or fully wrong or are there always the shades of grey?
That is exactly the moral dilemma both the epics talk of. What is good or what is bad, what is evil, what is righteous, are two sides of the same coin.

There is an interesting line in your book, Sita's Sister, which says, "Suffering silently is not strength, it's weakness."  However, we have always been brought up with the notion that showing your emotions in public is a sign of weakness. What are your views on this?
It is not the last word and this line pertains to a certain character in the book so in context, the line means more or less than it actually reveals. We often have rigid notions of strength and weakness. For instance, being mild is weak, but sometimes the most mild-mannered, soft-spoken person is stronger than say a loud, brash person. So, noting is the norm. Social decorum is vastly different from personal life's experiences, so showing your emotions in public or private depends on context and content, not just circumstance. 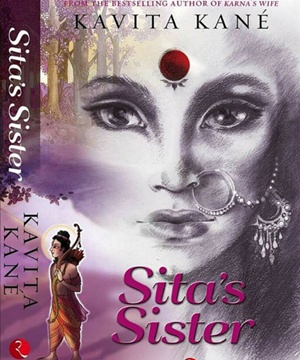 Surpanakha is a character who was hated as she was held responsible for Sita's abduction and Lanka's destruction. What inspired you to write a book with her as the protagonist?
If Urmila is the most overlooked character, Surpanakha is the most misunderstood as is Kaikeyi. Both are highly maligned women but what is it that makes them so?  Therein lies their enigma whose answers only they have. I wanted to tell Surpanakha's story, but not by painting her a saint or a sinner, rather trying to search if she was the villain or a victim or simply a woman who lived and loved in violence.

Both these epics - Ramayana and Mahabharata have glorified men and portrayed women to be subservient to their male counterparts where they have been kidnapped, humiliated in public or portrayed as villains. Would you say your books - be it Karna's Wife, Sita's Sister, 'Lanka's Princess ' were a sort of atonement to portray these women as a source of strength and a different side to them?
Mythology itself has become a victim of patriarchy and Sita, Ahalya are the quickest women who come to my mind whose original had been redefined. The original Shakuntala of Vyas is hugely different from Kalidasa's Shakuntala.

So,I wouldn't agree that women in our mythology were weak or subservient. Not Sita nor Draupadi nor any in fact. It is the later centuries and versions that have defined the women as such. Be it a Satyavati or a Devayani or a Tara or a Mandodari, all were strong women given the circumstances they lived in.

What are the books that you grew up reading? Any particular ones that have influenced you as an author?
I grew up in a home which housed ten thousand books and if you didn't like reading, you were considered a freak! But seriously, I can't name one 'favourite' as it isn't fair on the author, his work or the wonder world each led me into! All influence me somewhere, some time, more or less.

Now that you have authored four books, what can we expect from you next after Lanka's Princess?  Any more books in the pipeline?
Yes, the next should be out by this December.