Being at 'The Write Place' at the right time 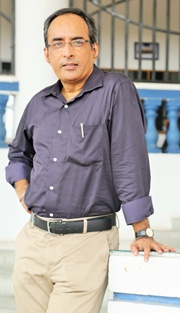 An engineer by qualification, Deepak Chawla has close to 30 years of professional experience in diverse areas such as projects, operations, business development and sales and marketing. He lives in Mumbai and currently heads the HR function at Reliance Infrastructure. Business as Usual is a reflection of Chawla's tryst with the corporate world and its profound impact on relationships, aspirations and decisions in his life.

In this interview with Swetha Amit, he talks about his book, the dynamics of corporate life and the inspiration behind his characters.

Business as usual is an interesting collection of short stories that resonate well with corporate professionals who are at the crossroads in their lives. How and when did the idea for this book take place?
Initially there was really no focus or thought of wanting to write a book as such. It was just a coincidence that I happened to know someone who was going through a similar situation as that of one of my characters - Raj, in the story Choices and Convictions. I decided to put some thoughts together around this to mainly express myself as I hadn't written since my college days. As I started working on some ideas around this situation, it wove into a story.

After completing this one, I was keen to write more and that's how another story,Balance of Fate came into being. Unlike my previous story, this one was based in the countryside. By the time, I completed this story, I worked around the other three, based on some ground rules that I had in my mind.  I wanted to introduce strong female characters, ensure all my characters were good and showcase the turmoil they were undergoing due to their convictions and decisions.  I also wanted to ensure that there was no explicit romance between my male and female characters. Based on this framework, I completed the other three stories and when I had finished the fifth, I was in two minds whether to retain them at their pacey flow or blow each of them and publish five different books. However I decided to keep it as a collection of five stories and that's how Business as Usual came about.

Coming to the aspect of publishing, it definitely was a challenge as I did not know how to go about the entire process. I also opted for the tough route where I decided to struggle on my own instead of using any of my contacts.  I happened to visit Crossword book store one day for a launch... merely out of curiosity on how to ensure that my book, if ever published, would find a place in these stores I will never forget Harshil Shah for this, who being just the coordinator put me in touch with someone from their office. I then went over to their office where they heard me patiently and then put me in touch with Anup. Incidentally, The Write Place was being launched around that time and you could say I was at the right place at the right time when I signed an agreement with Crossword. Things worked well from thereon. My book did well for a first time author and I am grateful to my readers for this.

The protagonists in your stories seem an interesting lot. Where did you draw inspiration from while chalking out these characters?
Well as I have mentioned earlier, my female characters are strong and the inspiration came from real life women whom I have interacted with during the course of my career. A dose of inspiration came from my own mother as well, who is, of course, not there anymore. It's not that one character is inspired by just one person. I would say that one character in my book has many shades of the people whom I knew. For instance, certain attributes of a particular person would have found place in the character of Rani from the story Choices and Convictions. Another set of attributes may be found in the character of Aisha from the story-Balance of Fate. I have some of my own beliefs, which find place in these stories. So it's a mix of real life situations and real life people.

Corporate life involves numerous dynamics such as tough choices, losing personal relations due to professional rivalries, dealing with bruised egos, controversies-all in the quest to climb up the ladder which often results in anguish and unhappiness. How does one maintain sanity and find peace ultimately?
Well I believe that there are bound to be challenges in every field be it the corporate world, entertainment, sports or education sector. There will always be people who will want to run you down or back stab you. Politics is present everywhere. However the whole crux lies in the fact of how passionate you are about what you are doing or what you want to do. There will be tough calls to take, instances that can provide a mental setback at times but does that mean you are going to give up? As long as you are focused about your purpose that you are standing for, peace and sanity will not elude you.

Mergers and acquisitions, usually undertaken with sound intentions, can often cause pain to some employees during the process of retrenchment such as in the case of Sudeep - the character from your story Balance of Fate.  How do you think they can recover and move on with life as though business is usual?
When the character of Sudeep was asked to leave, all the other estate managers wanted to gang up and collectively object to the management with regards to their retrenchment. However, Sudeep had such a high level of self-pride and esteem that he wasn't going to beg for his job if he has been asked to leave.

However, his pride gets deeply wounded only when he finds that life comes around a full circle where his former employers' wife, the character of Jenny, is stronger than him as she refuses a job offered by him despite her situation. He couldn't take the fact that someone else was stronger than him while all this time he was under the impression that he was the epitome of strength. As for moving on in life, I always believe that there are people in everybody's lives who will somehow end up mentoring you and create that difference. Enough to help you move on as though business is usual.

In the story of In Good Faith, the character Aditya leaves his home and family for better prospects in the US only to be embroiled in a legal suit. In this relentless quest for quality of life, many professionals ironically sacrifice their families and happiness. Do you personally feel that such sacrifices are worth it in the long run?
So, it brings us back to our earlier discussion of how badly you want something to make those sacrifices. It also depends on the order in which your priorities are ranked. For some, family may come first, for others it might be their career.  It's very difficult to have two-three things prioritised in the same order and being able to do justice to it.

Coming to this particular issue of the legal suit, I would like to stress on a point here which is to be aware of the eco system in which we are working. Today is the age of digital and social media where we got to be careful and understand the implications of what we write or express on these platforms. In the case of Aditya, he should have known better than to make a casual statement about some confidential things at work.  Therefore, we need to be careful about what we say in a social setting as it could lead to repercussions that we may regret later.

In the story of Choices and Convictions, it is shown that Rani's character is averse to networking. What is your take on networking today and do you think a professional can move ahead without it?
There are two parts, which I want to highlight here. One is Rani's character. She is not exactly averse to networking but if you read her character in totality, what she is averse to is pretenses and being fake. She is a very straightforward person and hence she detests putting on a façade.

As for networking, I strongly believe that it's important in today's world. However, how you handle those networks is important. For instance I know people who exchange visiting cards and bombard you the very next day with emails and calls, stating that he / she wants to do business with you. Therefore everything needs to be done in moderation. While you cannot afford to be introverted always, you cannot end up networking to an extent where the other person begins to avoid you.  I observe these days that whether it's a network or any relation, people want relations only when they need a favour. Why can't one have good and healthy relationships without any vested interest? I feel that relations have to be genuine always so that even if a situation arises, the other person will feel like being of some sort of assistance. Personally speaking, my idea of networking is to mostly learn from people and not for any selfish gains.

Lastly after Business as Usual, what can readers expect from Deepak Chawla next?
I am currently writing or rather I should say attempting a novel. About 40 - 45 per cent of the story line is ready. For me it's an experiment as I am writing full-fledged novel for the first time. It is set in the urban Indian context and this time there will be characters with shades of grey unlike in my first work Business as Usual. However one will still see the strong female characters present in my current book as well.