From selling ice-cream, peddling computer training courses, writing ad copy, to serious business journalism as assistant editor of The Economic Times author Shatrujeet Nath  talks to Swetha Amit about his book, The Karachi Deception, a military thriller centred on the Indian army. His previous book The Guardians of Halala and the forthcoming title The Conspiracy at Meru  are the first two of the four-volume Vikramaditya fantasy series. In between writing and researching for his books, Nath runs his IP and content creation venture JokerStreet 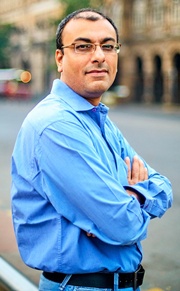 From selling ice-cream to business journalism and now fiction writing must have been quite a tumultuous journey. How and when did you decide to write The Karachi Deception?

One thing which I noticed over the years is that I became bored very easily. This boredom was reflected in my career graph where I initially started out as a sales and marketing person selling ice-cream and then switched over to advertising. After five years in advertising, I moved to journalism where I stuck around for about 12 years before branching out to become a full-time author.  In fact I am still looking for that one thing to settle down with on a permanent basis.

When I quit journalism, I knew I wanted to write fiction. The core idea of The Karachi Deception was there in my mind ever since early 2000. I would often wonder why India never sent its best commandos to seize the most dreaded underworld don.  Therefore, when I was scouting for ideas, this particular one surfaced at the top of my mind and I decided to work around it.

The initial plan was to write a screen play for a movie. After about 30-40 pages, I realised that it had turned out more like a novel and continued working on it for six - seven months. When I had finally finished, it ended up being a much longer that what I had wanted, which led me to work on it again. My second draft turned out to be a shorter version which was eventually published.

The Karachi Deception treads on the off-beaten path of the Indian army - something not usually done by most Indian authors. What made you choose this theme for your debut thriller?
I chose to write a military thriller particularly because the subject is very close to my heart. My father was in the armed forces so I literally grew up in military cantonments. I was well aware of the body language of a soldier, the way they would speak and behave in several circumstances. While my book might be a work of fiction, the entire portrayal is based on my experience with the armed forces that I grew up interacting with.

You know it's really strange that while we have been consuming numerous works of spy fiction by Frederick Forsyth or Tom Clancy, not many Indian authors seemed to have ventured into this particular genre. Apart from Mukul Deva, there are hardly any works on this subject especially in a territory as fertile as the Indo-Pak region.  However after Mukul and myself, there have been a few attempts to write on this theme and hopefully there will be more books on this particular topic.

Writing on topics such as the intelligence agency, army, secret missions requires a great deal of knowledge and research. How did you go about this entire process?
Well, the research was more about understanding Pakistan and its landscapes. So I spent extensive time on the internet, referring to Wikipedia and Google maps. As I mentioned earlier, my time spent in the military cantonments helped in my understanding of the soldiers to a large extent.  Besides I have also read a lot of spy fiction in the past, which helped me with the authentic treatment of my book. The main objective of my book was the authenticity aspect which I have managed to bring out successfully as the readers feedback have proclaimed the same.

Your book also deals with terrorism and finds one of the characters making a blatant statement about how killing one man alone will not end the network and chain of activities. What, according to you, is an effective way to curb terror?
Honestly speaking, I don't really know what the solution is. It isn't as simplistic as eliminating one man like it was in the World War 2 where eliminating Hitler brought an end to that barbarism.

Terrorism is a chain of activities  - a head that has branched out to many parts. Killing one man will not solve the problem. It has become way too complicated and if one was to ask who started the entire chain of activities, people will only end up blaming one another.

There is also an instance in your book where taking on a particular project is labelled as a thankless job with no expectations of any award or rewards. Despite such circumstances, what is it that motivates such individuals to take on a risky venture?
I think in this case the soldiers who take up such a task are in a different league altogether. They purely do it out of sheer passion and as a sense of duty which prevails around them. They are bound by the love for their nation which probably makes them take up such missions without any expectation of appreciation in return. It's just utmost dedication on their part.

As a leader of the mission, one of your characters, Imtiaz, tries to redeem his honour by trying to ensure the success of this operation, despite the risk of being court-martialled, which in turn means the loss of honour. In such a contradictory situation, if a leader has to choose between success and honour, what would you say is more important?
It's a very tricky question. You see sometimes for an individual, honour is success. I think a lot of this is probably dependent on what an individual wants out of his / her life.  In Imtiaz's case, the operation was aborted and he had the choice of coming back. But for him the purpose of completing the mission was more important than the risk of being court-martialled. He felt that an incomplete mission was a slap on both his and the nation's face. Now if you look at the character in my next book of the Vikramaditya series, honour was everything for King Vikramaditya as he was a man of his word. Therefore, it varies from individual to individual and what is important to them, based on which they make their respective choice.

"Decisions are neither good nor bad. If something works it becomes a good decision'', is an interesting line from the book. So, how should a leader distinguish between a good and a bad decision?

It's a very difficult thing to assess. You see, no decision is right or wrong as it all depends on the particular situation under which it is made. As a leader, a decision can only be thought through carefully or taken hastily. There are so many variables attached to the process of decision-making, which can make it quite a cumbersome process. Its only after the decision is taken, will it help you understand whether it was a good or a bad one.

After Karachi Deception, Guardians of Halala, and The Conspiracy at Meru, what are your forthcoming books that readers can look forward to?
Actually the Vikramaditya series consists of four books.  Now that two of them are out, I have two more books to write, which will come out in the next two years. Readers are eager that I write another Indo-Pak thriller but that won't happen for the next couple of years till I finish the series. I do have a plot but I need to work around that as I feel my next thriller has to be as good if not better than The Karachi Deception.

(See: Excerpt from The Karachi Deception)