Wisdom lessons from the best leaders 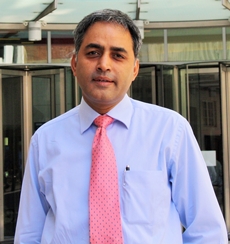 Ashutosh Sinha has been a business journalist across India's print and television media. As a news anchor for NDTV and TV18, Sinha's job required him to speak to a variety of business leaders and policy makers. This access to India's business leaders in his two decades as a business journalist lead to his book, The Executors, which features 30 inspiring personal stories of India's top CEOs.

In this interview with Swetha Amit, Sinha talks about the inspiration behind his book, how hi frequent interactions with top leaders became an MBA lesson for him and his future plans.

How and when did the idea of writing The Executors come about?
Once I began researching for the book, I spoke to several people to get a sense of what to write. It was during one informal communication with Naresh Gupta, former managing director,  Adobe India, that I got the focus of the book clear in the head. When I explained to him what I was looking to write about, his answer was 'You want to talk about the people who build the highways, not the ones who dream about it'. After that, I focused on the business leaders who 'execute' for their companies and the lessons they have learnt from their personal lives.

Your book is a compilation of stories of some of the best managers. How would you describe your experience of meeting each of them while writing this book?
For me, it was like doing an MBA lesson over the one year that I spent for the book. Business leaders are often driven by numbers, whether they speak about it or not. I have tracked the stock markets closely and the numbers that their companies report every quarter. I know some of them for many years and have heard the number-driven statements from them. So, getting them to speak beyond the numbers was sometimes a little bit of a challenge. After a little bit of egging on, they did open up.

There is a story in your book which describes how a graduate of a premiere B school took up the task of going through a salesman's job in order to learn vital lessons by building a connect with people. As a journalist, what lessons did you imbibe by connecting with people during the course of your career?
It is the foot soldier who always helps win the battle. That is true of businesses, armies as well as a reporter. If you have done enough and more as a reporter or a salesman, running around, getting the right deals or stories, it will always help in the later part of your career. Some of your contacts will become successful industry leaders and that relationship will matter a lot.

A chapter in your book describes an instance of a manager who turned around Johnson & Johnson's business in Japan even when he was initially considered a gaijin (outsider). Considering these initial cold vibes, what do you think made him pursue relentlessly rather than turning his back on the task?
Global businesses are driven by the numbers game. Often it does look like some things that are taking place are being executed from a template that has been defined by a senior employee. But it is critical that the leader be seen as the person who can take the business out of the tricky situation it was in. The manager in question – Krishnakumar had never lived in Japan, did not speak the language but he knew one thing – if he could show the team that he could get a deal or two, the team would be inspired for sure. That is exactly what he did. He is someone who believes more in doing it rather than talking about why it cannot be done.

You have talked about the concept of a 'war room' where everyone is a part of it and is created to make customers happy. Could you elaborate more about this concept?
All businesses thrive because it helps solve customers' problems. So, it was decided that the entire team right down to the foot soldier had to meet and discuss the problems the customer was facing. When the entire team is aligned to that one goal of solving the customers' problem, it is sure to end up as the winning team, sooner or later. The customer needs to be told that the entire team is committed to solving their problem and after that it is just about making sure that the deal that follows is beneficial for the customer, too.

The chapter on Aparna Purohit emphasizes the fact that the first battle is always in our minds which ultimately helps in building one's self confidence at a later stage. So do you see this attribute as one of the key factors to success?
If you believe you can do it, you can. Winners typically believe that they can do something which is out of the ordinary. They may not think about it but, given their talent and abilities, they are able to pull out something outstanding when it may not be expected. This applies not just to sports but also to business. That is why, in my understanding, for all winners and those who are looking to be winners in the future, this is a very inspiring story.

Chapter 23 emphasises that Mohit Anand had an army background and moved across states, learning to deal with different kinds of people.  Do you see such an upbringing as a vital factor in leadership or managerial skills?
Being disciplined is just one of the attributes of success. In today's world, having experience of working or living in different cultures is a great asset. It certainly is a great experience to have but it is just one of the ingredients of success. Ultimately, it is the doers who are respected and revered. When a top manager has that kind of an experience, it is a great asset since he can appreciate different cultures and help build a team.

Do you have any more book ideas in the pipeline?
I hope I can take out the time to write more. There are so many stories to be told that writing or communicating will continue to be very important. The medium may change but the need for communicating will always exist.