'Regional languages are the key to reaching the masses'

Amish Tripathi is the author of the bestselling Shiva Trilogy and of The Scion of Ikshvaku, the first in the Rama Chandra series. He was in the financial services industry for 14 years before becoming a full time author. 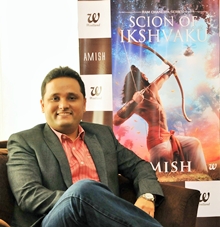 The Shiva Trilogy has sold over 2.75 million copies, and his books have been translated into Hindi, Marathi, Gujarati, Telugu, Tamil, Assamese, Bengali, Malayalam, Kannada, Estonian, Spanish, Portuguese, Bahasa Indonesian. The Ramayana series shows every indication of following this success, with The Scion of Ikshvaku already a bestseller.

Forbes Magazine has listed Amish amongst the 100 most influential celebrities in India for four years in a row,  the Society Young Achievers Award for literature in 2013,  and was also selected an Eisenhower Fellow, for outstanding leaders from around the world. In this interview with Swetha Amit, he talks about how the idea to translate his books commenced, the importance of retaining one's roots through regional languages and the how to promote Indian language translated copies.

The Shiva Trilogy has broken all publishing records. The first instalment of the trilogy has been translated into 16 languages, second in 14, third in 11 and the most recent first instalment of the Ram series, Scion of Ikshvaku is now available in three languages.  So how did the idea to translate come about?
My grandparents used to emphasize that while there is one language which earns you your bread and butter which is English, there is also a language of the heart that connects you to your roots which is the mother tongue. At home I would converse with my parents in Hindi as it's a language I am extremely comfortable with. So I have a lot of personal commitment towards Indian languages.  While I say this, I am not someone who hates English as it's a language of commerce besides being an international language which is essential for one to secure a good job.

If you consider the business side to it, such as newspapers and TV channels, English is only a tiny proportion in comparison to the regional languages as the latter tends to reach out to the mass audience, multiplying the TRPs in the process. It's a similar case with movies where the Indian languages tend to strike a better chord as compared to its foreign counterpart.

However the publishing industry is the only one which works with the reverse philosophy where English is dominant and regional languages take a backseat. I personally believe that aggressive marketing has not been done in the case of Indian language translated copies. It can genuinely become a mass industry only when Indian languages start getting due respect. Therefore it became a personal commitment for me to ensure that the translated versions get marketed in the appropriate manner and that proper launch events are done for all the languages. The results are seen in the numbers and I am told that 2.5 million copies is sort of a record for Indian translations. However our long term aim is to ensure that the Indian language editions sell ten times more than the English editions and that's when we know that we have penetrated the mass market.

How does the process of translation work? What is the duration and the role of the publishing house in this?
It was a little challenging initially as not as many people were doing it as they should have been doing. So for my first book The Immortals of Meluha, my publishers found various local publishers, made deals with them and got the translation done. However from the second book onwards, my publishers started approaching the translators directly. Since the entire process is set up now, the translated versions are coming out faster with my latest book Scion of Ikshvaku.. However the entire process is a little time-consuming as the philosophy in my books is a little intense and translating it with authenticity takes time.

It is said nothing can beat the original. So how do you manage to retain authenticity especially when it involves not one but several regional languages? What has been the readers' feedback?
The key factor is to identify whether the translator shares the same world view and passion for the subject which will help in retaining the authenticity. One way to judge is seeing the sales numbers in the different versions which fortunately have done well. Some of them have even won awards. For instance, the Assamese versions have won the prestigious Sahitya Akademi award. So these are some of the parameters to judge. Readers' feedback has also been overwhelming. In fact many of the young readers buy the translated copies for their parents to read. One of them for instance had written to me saying his parents had read the translated version of Scion of Ikshavaku as they were wondering about their son's sudden interest in Lord Ram. They apparently liked the book as well. Sometime back I got a call from a girl who said that her grandmother had read the translated version of The Immortals of Meluha and wanted to have a word with me. Now conversations with elders are very different as they are aware of some of the stories and it feels good when they appreciate your works about the same. 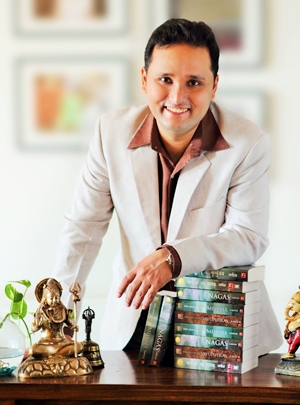 However the real new innovation is being done via a special tie up with this Bangalore based company called Daily hunt. They are selling all my language editions on mobile phones which I personally feel is a huge market. Another innovation that's being done is to sell chapter wise where readers can buy a chapter at the cost of downloading a song which is Rs 15. If they like one chapter then they can go ahead and buy the next one. This can be downloaded and read on the mobile phones. It is a huge market considering the fact that you have 250-300 million smartphones today and the user rate is growing in numbers by the day. In small towns like Latur especially, there are no physical book stores yet everyone possesses a mobile phone. So I see this innovation coming in handy to penetrate the rural market.

I am quite thrilled with this prospect as that way I ensure I reach out to the mass audience who reside in rural India. Also with such people, the language translations are a hit as they prefer to read books written in their mother tongue over reading in English language which they strictly use it only during their office hours.

Readers especially from regional zones wonder why authors do not release the translated versions along with the original English one. What is your view on this?
I think that this particular market for Indian language translations has never been taken seriously. The general assumption is that the Indian language readers don't read which is not true considering how all the big newspapers are in Indian languages. I also think that there is a certain bias against Indian languages which needs to be overcome.

Your books are translated into Spanish, Portuguese and Estonian as well. How do you see the response from international audience? Will you be releasing your other upcoming books in foreign languages as well?
The response has been good. In fact the other day there were some pictures sent from the launch of The secret of the Nagas which was in Brazil. There were people who had come dressed up as Lord Shiva and the entire audience chanted Har Har Mahadev, which was a very sweet gesture. I also received a tweet from a Portuguese reader recently. I personally haven't launched books at these international stores but I am planning to do that sometime next year.  In fact Scion of Ikshvaku  will also be releasing in foreign languages some time but that's part of my phase 2 plan. At present my prime focus is tapping the Indian market with the Indian language translations and I will be very happy if my Indian language translations top the chartbusters with its sales numbers.

Many lit fests focus primarily on English literature/ Indian writing in English. However 'The Gateway Lit fest' conducted recently at NCPA, Mumbai focussed on primarily regional literature. As one of India's leading authors in fiction, what is your take on regional literature?
In fact I had attended a Marathi lit fest sometime back where I had spoken and emphasised the fact that we must respect our Indian languages. As mentioned earlier I am not anti-English as I feel that this foreign language is essential to secure a good job. The gateway lit fest is a fantastic idea. There are treasures in our regional literature and I am not just referring to ancient but modern literature as well.

Mrityunjaya by Shivaji Sawant is one such read which unfortunately is not known to people outside of Maharashtra. There is also this wonderful series called Mahanand Sangra by Narendra Kohli.  Such translations need to be marketed well as not many have heard of them outside their pertaining.  While our schools teach Shakespeare, they must consider including works of Kalidasa and Thiruvalluvar as well. It's important to start recognising treasures in our own land and it's something I feel passionate about.

Do you personally read any translated literature? Any particular books that rank among your favourite reads?
Yes I do. In fact as mentioned above, Mrityunjaya  by Shivaji Sawant, Mahanand Sangra by Narendra Kohli are some of the works that I have enjoyed reading. Bhima by M T Vasudevan Nair is a creative piece which talks about the Mahabharata from Bhima's perspective. I discovered all this during my travels. It's sad that such treasures are not highlighted enough and they should be marketed a lot more.

How do you see the market for translated versions? Do you recommend other popular authors to release translated versions to penetrate through the regional belts?
Yes I would certainly recommend them to do that. You see only when adequate attention is given to Indian language books, will the distribution network develop more and that's also when the online retailers will start focusing on those markets as well. Everyone must take some of these measures as a commitment to our country as it expands the market for Indian language readers.  It's one of those rare things which is in selfish interest and yet good for the country at the same time.

While you have fans all over the world, do you also have critics who challenge your work? If so, how do you deal with them?
Every book has its share of critics. Fortunately for me, most of them have been supportive and kind on its philosophies. However there have been some who have said that the language is not literary enough which is fine by me as everyone is entitled to their opinion. If I make some mistakes, I am certainly willing to learn and whenever I disagree with the critics' opinion then I politely respond by thanking them for their feedback.  At lit fests sometimes, there are bound to be disagreements but they are all done in a refined manner without sounding rude. I have learnt that Indians have that innate liberalism to accept your right to have a different point of view as long as it's done with respect.