Recasting the Mahabharata as a 'historical' fact than a myth 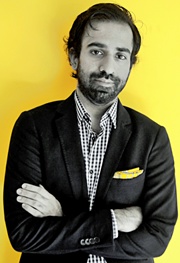 Aditya Iyengar is a media professional having started his career as a copywriter for Mudra Communications, from where he moved on to a brief stint at Bangalore as Creative Supervisor for Ogilvy, creating campaigns for Intel, Royal Orchid Hotels, Vodafone and iGate.

Later as associate creative director, History TV18, he created the immensely successful Voter Registration Drive from Network 18 called 'Go Vote' that registered over a lakh new voters. He has also written the TV show for CNBC-TV18, 'Get a Life'.

Currently Iyengar is the senior marketing manager of History TV18. He is responsible for conceptualizing and executing campaigns and handling brand solutions for the channel. In this interview with Swetha Amit, he talks about his inspiration for his debut novel, The Thirteenth Day, the craze of people to project a larger than life image on social media and his upcoming books.

Mahabharata has been retold several times by numerous authors. What made you choose this epic for your debut novel?
I have always been interested in the Mahabharata as an epic. I think it's an incredible story, which consists of five princes, aspects like murder, exile, attempted murder and arson. More than any other epic, for me it was the greatest story ever told in history and that's what made me choose the Mahabharata as the basis for my first book.

I particularly wanted to tell the story of Abhimanyu for which I had to narrate the epic. I also narrated it from the perspective of three characters as I realised that readers may not be able to comprehend it from just one context alone.

I also wanted to narrate it more as a historical fact than a myth. My retelling of the Mahabharata from the viewpoints of Yudhishtira, Radheya and Abhimanyu was with the intention to be original and unique and do something no one has ever done before.

You have talked about the Kurukshetra war, choosing the 13th day in specific. What was the idea behind choosing this particular day as the theme of your book?
The 13th day of the Kurukshetra war was the day of the chakravyuh (the lotus formation by Drona). Since my book centred on Abhimanyu, I had to talk about the chakravyuh as it was the most important part of his life.  There is also a passage in the book where Yudhishtira talks about the chakravyuh as a metaphor to human life stating that in order to understand oneself, one needs to peel off the different layers of the persona. This was one of my inspirations as well to talk about the 13th day of the war.

The 13th day of the Kurukshetra war marks the heroic, yet unfortunate death of Abhimanyu.  Interestingly 13 is also a number that is considered inauspicious or unlucky by many Indians. What is your theory for this superstition against this prime number?
I don't think Indians as such consider number 13 as inauspicious. At least I don't know of any instance where our culture mentions it.  In fact this did not even occur to me when I was writing this book.

I think this unlucky tag to number 13 is derived from the West. It is just a trend that somebody started and has been carried forward without any logic. It is definitely a superstition and just like all other superstitions, people milk it for commercial value. Ultimately it's just fun and we all like a little horror in our lives so we tend to bide by this 'illogical superstition.'

As a media professional, you have observed people portraying a grand image of their everyday lives on social media, appearing attractive to others.  Yet at times, it can be constituted as a myth. What is your take on myth? Did you ever fear of not attracting readers by retelling the Mahabharata as a historical fact rather than a myth?
With regards to aspects like myth, I believe that nothing is really as what it seems. A person may be a powerful ruler but will still have  insecurities, which may not be apparent to the world. Problems with myth is that it takes away this human element of the characters and glorifies them to a heroic status. One of the reasons why the Bhagavat Gita is powerful is because it portrays Arjun in a more human light by displaying his insecurities and uncertainties about the war.

What people ultimately consider heroic is the fact that someone like them has emerged as a hero by overcoming the obstacles faced by them.When I started writing my book, my intention was to tell the story of the Mahabharata in a way that's never been told before.

At that stage I didn't place too much emphasis on whether people would be attracted towards my book or not. All I knew was that I wanted to create a story which people would enjoy. I wanted to adopt a more human approach to it rather than surrounding it with grandeurs associated with a myth.

Many alliances were made for a strategic purpose in the Mahabharata. Do you see a similar trend carried forward today where human relations are developed with a specific purpose in mind without placing too much emphasis on emotions?
Absolutely. It's a fact that people do make friends for a transactional purpose.

The interesting part is that all the characters in the epic understand that they are a part of one big transaction and that their purpose is getting served some way or the other.

This is both the beauty and sad part of human life which I wanted to capture in my book. The fact remains that we don't necessarily do things for people unless we get something out of it. This element of transaction happens across all spheres of life.

There is an interesting line by Drona where he tells Yudhishthira that 'We are all born to do certain things but not necessarily in the right circumstances in which we do them'. Do you think this is pertinent to why many corporate professionals / bankers today are gradually turning into authors?
This line certainly has a striking parallel to life.  Not everyone gets to do what they want initially and therefore undergo a lot of struggle to achieve what they want.

Characters like Drona and Yudhishthira also had to struggle largely in their initial years. The element of transaction exists here as well. In order to achieve your goal, a few compromises have to be made. People realize that they have certain responsibilities and on the other hand, they also want to fulfil themselves. So they make those quick bucks and then pursue what they really want to do.

An interesting conversation between Shikhandi and Abhimanyu portrays the contrast in their personalities where latter yearns for glory and fame while the former shies away from it. Considering how attention-seeking the world has become today, do you see individuals like Shikhandi these days?
I think there are people like Shikhandi but we do not know them as they are not the ones who would boast about their glories on social media.

Now if Shikhandi were on social media, I don't think she would have shared any post on Bhishma's fall and how she was responsible for it. It does not matter to her as she sought to do things for her personal satisfaction more than to evoke praises from others and bask in the limelight. That's the understanding I have of the character of Shikhandi.

It is rare to find people like her. You see as mentioned earlier, there is this constant desire to appear happy in the eyes of others. So even if something does not excite a person, they would still make an effort to display their excitement for the fear of not wanting to reveal their true emotions.

So yes while there may be people like Shikhandi, we may not have heard about them as they don't post about their achievements on social media.

The Mahabharata war showcased the use of several "divine" weapons such as the astras, etc. Do you think the technology behind these supernatural weapons somehow got carried forward to the modern day nuclear weapons?
I don't think that such a technology ever existed those days as human beings would never let go of something like that.  What has happened is that the constant retelling of Mahabharata has glorified these weapons into suddenly becoming nuclear astras. It is morphed into something that is very different from what it actually is.

It is similar to how a certain story is taken up and blown out of proportion by the media and the people involved in the story are inflated into being some sort of demons. For me it's nothing more than an exaggerated storytelling. We should just look at this as a great story and nothing more than that.

After reading several versions of this epic, I realized that it is a big story which is intertwined with one story inside another. I knew that it was impossible to retell this entire epic and hence decided to just attempt retelling a small part of it.
Writing this book would have involved extensive research. So what were the books that influenced your thought process while penning this one?
Amongst the several books I researched, Mahabharata by C.Rajagopalachari influenced me to a great extent. The translation by K.M.Ganguli also was an interesting read as it gives an idea as to how the epic actually sounds.  He was the man who translated the epic from Bengali and Sanskrit to English for the first time in the 19th century. There have also been other interesting retellings such as 18 days by Grant Morrison who wrote about the Mahabharata set in a different planet altogether, The Great Golden Sacrifice of the Mahabharata by Maggi Lidchi-Grassi and Mahabharata by Kamala Subramaniam.

Lastly any more books in the pipeline? What will they be based on?
My second book is a thriller with the backdrop of Bollywood and how it influences our ideas on masculinity. It's also got a correlation to the Ramayana.

The other book which I am working on is a fantasy series. So yes, I have a lot of plans at present and hoping that things materialise the way they should.

(See: Excerpt from 'The Thirteenth Day')