Boardroom spirituality is all about values and common sense: Gopika Kapoor 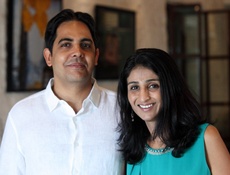 with developmental disabilities.  In this interview, withe domain-b correspondent Swetha Amit, she talks to domain-b'about her new book Spiritual Success: wisdom for the boardroom and beyond, co authored with her husband Mohit and their ideas about spirituality and the need to develop an attitude of sharing knowledge with the world.

How and when did your tryst with writing begin?
I have been writing ever since I was in school, when  I used to write for the students magazine. I also contributed to the College publications such as the College newspaper and magazine. After graduating in English literature, I did a course in journalism from Xavier's Institute of Communications. Post this, I began to work for The Times of India in Mumbai. So writing that way, has always been a part of my life. Like every journalist, I too wanted to write a book and that's how my tryst as an author commenced.

All your books have been linked to a spiritual quotient. What does spirituality mean according to you?
Spirituality is an attitude with which you live your life. It's about having a sense of gratitude for everything that you have. It also focuses on living in the present and not fretting about the past or future. It is the ability to recognise that everybody doesn't have the same ideas, principles, and beliefs and yet respecting them for that. Basically it's an attitude of live and let live.

So spirituality is nothing really fancy, erudite or difficult. It is basic common sense. People make it out to be complicated because they want it to be exclusive and inaccessible.  In all the books I have written, I have tried to make it relatable by using simple language so that it can be read by everyone and have a universal appeal.

Your recent book talks about spiritual success. How would you define 'success'?
I think the definition of success is different for different people.  According to me, it lies in the ability to perform any task thoroughly with your undivided attention and complete focus. Most importantly it is the ability to enjoy the task you are doing irrespective of the result.  That is one thing. The other thing is the concept which I had learnt a few years ago - about the ability to blend the various aspects of our lives.

Our life is basically composed of several aspects which includes family, spouse, work, community, friends and self, which many people tend to neglect.  So when all these aspects are aligned like a bar graph, then you have had a successful day.  Sometimes, one aspect may be neglected due to the other. For instance if I am partying a lot, I am neglecting my body by abusing it with fried food and alcohol, then I would not say I have had a successful day since I am neglecting the self or the spirit.  I believe that there has to be a balance in life.  That according to me is success.

You have used the term 'Healthy Ego' in your book, which is essential for success.  How does one attain this and not let the negative aspect of ego take over?
When we talk about the ego, we talk about the 'I' factor. For instance I can say 'I' have written the book or 'I' have done this. So the 'I' is basically the ego.  Instead if I were truly without ego, I would say the book has been written and I was the medium through which it was written.

Unfortunately, most of us are very far away from this and require constant work to reach this state of getting rid of the ego.  There are numerous cases where, as people start to achieve more, the 'I' takes over after a point in time. So it all becomes about what 'I' did and the 'I' factor never leaves the conversation. The concept of a healthy ego is that it is okay to have an ego as long as the ego is not taking over you and you have a control over it.

Many people seem to find immense pride stating how busy they are. Do you think they equate success to being busy and thereby find self-gratification in this?
Yes they do. Sadly, there is this myth about being busy where people believe that they are somebody very important when they say they are busy. I think efficient people are those who do their work quietly instead of walking around and telling people how busy they are. There are also instances where people don't respond to other people's phone calls or messages. In such cases you will find the ego playing a pivotal role. It's like 'I am too busy to talk to you' or 'I am so busy and important that I don't have time to talk to you'. There is this new term for such behaviour which is called 'posturing'. It means putting on this act of being very busy and important. 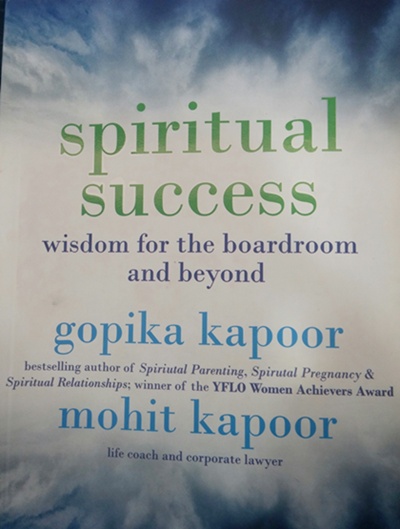 This basically means, that if your hands are engaged in typing out a report, don't let your mind wander and start worrying about the meeting you have the next day.  I think that would be one way to avoid stress. The key is to focus on the present rather than worrying about the past or future. This way, you also end up enjoying what you are doing a lot more.

You have mentioned about how people should be abundant and share their knowledge selflessly. However there are instances where many use this wealth of information to move ahead and leave us behind. How does one still retain faith in humanity and refrain from feeling bitter?
I strongly believe that there is enough for everybody and more whether it is money or work opportunity. So if you have this sense of abundance, it will automatically expand your whole world view.  Everybody tends to face setbacks in life and it's impossible to have a life, which is only smooth sailing.  So if you have been taken for a ride or cheated upon, the first thing you to do is stop holding grudges and live in the present. To get yourself out of this mess, you need to plan your next course of action and move on.

Most importantly, you have to act which is what Krishna emphasises in the Gita. You can't keep getting crippled by your past. You cannot of course be gullible and naïve by leaving an envelope of your trade secrets on to your competitor's table.  But you need not lose faith in humanity completely. People tend to feel bad about such petty things as they let their emotions get the better of them. Emotions again comes back to the concept of ego which I talked about earlier. So the key factor here is for people to let go of their ego, which again as I said is a difficult task.

You have talked bout taking a classic example of Prahlad Kakkar as to how a mentor despite sharing knowledge and his wisdom remain secure in his position. What does it take to remain secure?
I had met Prahlad about 10 years ago.  He was on the top of things but had always been a bit of a maverick. He was extremely secure in his work. I think if you are secure in the work you do and as long as you are confident of your talent and knowledge without being egoistical about it, then that will give you enough security to share your wealth of information.  I think knowledge is something that needs to be shared. More the skills and knowledge available, the better it is for the world.

I have talked about the concept of abundance in my book where I have emphasised that there is enough out there for everybody. So there is no reason for people to hold on. It's like holding on to 50 paise, when there are lakhs of rupees out there. Sadly there seems to be a petty mind-set that has developed among people today. Many are not willing to share any kind of information with others, be it recipes, their designers' contact details or even their children's grades. People need to realise that there is a huge wealth of information out there and when you know there is enough out there, it doesn't matter what kind of information you share.

Lastly, what are your future plans?
I have always wanted to write fiction. So maybe my next book will be something in the fiction genre. I have not thought about what it will revolve around. So I will have to think about some ideas and work on it.