German parliament on Wednesday elected Olaf Scholz as Germany’s new chhancellor, giving him 395 out of 707 votes in the secret ballot, and paving the way for a government by the federal "traffic light" coalition, formed by the SPD, the ecologist Greens and the liberal Free Democrats. 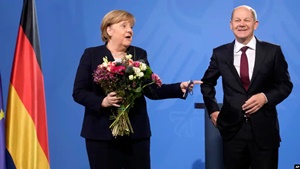 The lower house of Germany’s parliament elected Social Democrat Olaf Scholz as the new chancellor on Wednesday to succeed Angela Merkel.
Merkel, who steered Europe’s biggest economy for four successive terms of 16 years, handed over power to her successor Olaf Scholz in an official ceremony on Wednesday. She left her office in central Berlin by motorcade.
Scholz's center-left Social Democratic Party, which won the most votes in September's federal election, leads the coalition government along with the Greens and the libertarian Free Democratic Party.
Scholz, 63, a career politician in the centre-left Social Democratic Party,  has held a wide range of posts, including as member of parliament, mayor of the port city of Hamburg, labour minister and finance minister in coalition governments under Merkel.
Germans see a continuation of Merkel's governing style in Scholz, who is a calm, steady hand in a crisis and a pragmatic leader striving for compromise.
However, on matters like foreign policy and European policy, Scholz will be more aligned with the President Joe Biden of the United States.
"The trans-Atlantic relationship and our cooperation as part of NATO remain steadfast," he said. "We commit to a community of democracies across the globe and I am very grateful to President Biden for emphasizing the importance of multilateralism and at the same time, we are committed to what unites particular nations: the idea of freedom, the rule of law, democracy and respect for human rights," Scholz told a news conference on Tuesday.
In domestic policy initiatives, each federal party approves a coalition agreement that lays out government objectives, such as raising the minimum wage to 12 euros/hour ($13.50), phasing out coal-fired power plants by 2030 and making a pledge for the country to go carbon neutral by 2045.
Accordingly, Scholz announced members of cabinet that include politicians from the three parties.
Also, it may be noted that all the ministries in charge of national and international security and diplomacy in the new cabinet are headed by women, some for the first time. The Greens' Annalena Baerbock will be foreign minister, while Social Democrats Nancy Faeser and Christine Lambrecht will be interior minister and defence minister respectively. In fact, eight of the 16 cabinet members will be women.
Prime Minister Narendra Modi congratulated Olaf Scholz on being elected as the Federal Chancellor of Germany.
"My heartiest congratulations to @OlafScholz on being elected as the Federal Chancellor of Germany. I look forward to working closely to further strengthen the Strategic Partnership between India and Germany.," the prime minister said in a tweet.
MORE REPORTS