Gen Bipin Rawat, India's first Chief of Defence Staff, his wife and 11 other armed forces personnel died on Wednesday after the Mi17V5 military helicopter they were travelling crashed near Coonoor in Tamil Nadu, the Indian Air Force said. 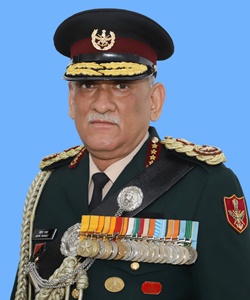 Along with General Rawat, his wife Madhulika Rawat, Brigadier LS Lidder, Lieutenant Colonel Harjinder Singh, Naik Gursewak Singh, Naik Jitender Kumar, Naik Vivek Kumar, Naik B Sai Teja, Havaldar Satpal and pilots were travelling in the chopper. There were 14 people, including the pilots, on board.
The helicopter was on its way from Sulur in Coimbatore to Defence Staff College in Wellington where Rawat, along with Chief of Army Staff MM Naravane, was slated to participate in an event later.
"With deep regret, it has now been ascertained that Gen Bipin Rawat, Mrs Madhulika Rawat and 11 other persons on board have died in the unfortunate accident," IAF tweeted.
"Gp Capt Varun Singh SC, Directing Staff at DSSC with injuries is currently under treatment at Military Hospital, Wellington," it added.
The copter was being flown by Wing Cdr PS Chauhan and Sqn Ldr K Singh.
The helicopter crashed in Katteri-Nanchappanchathram area near Coonoor in the hilly Nilgiris district.
Nilgiri's Collector earlier said 13 of the 14 occupants of the IAF helicopter that crashed in Tamil Nadu have been killed and there is one survivor, a male.
“Gen Bipin Rawat was an outstanding soldier. A true patriot, he greatly contributed to modernising our armed forces and security apparatus. His insights and perspectives on strategic matters were exceptional. His passing away has saddened me deeply. Om Shanti,” Prime Minister Narendra Modi tweeted.
"Deeply anguished by the sudden demise of Chief of Defence Staff Gen Bipin Rawat, his wife and 11 other Armed Forces personnel in an extremely unfortunate helicopter accident today in Tamil Nadu. His untimely death is an irreparable loss to our Armed Forces and the country," defence minister Rajnath Singh tweeted.
“Deeply shocked at tragic demise of CDS General Bipin Rawat and his wife. We worked closely together in the last few years. It is a huge loss to the nation,” external affairs minister S Jaishankar said in his tweet.
The IAF said a Court of Inquiry had been ordered into the accident, involving a Mi-17VH choppper that took from the Sulur IAF station in nearby Coimbatore.
MORE REPORTS