A fragile coalition of left-wing, centrist, right-wing and Arab parties on Sunday won on a no-confidence vote in Israeli parliament, the Knesset, ending the 12-year run of Benjamin Nethanyahu as prime minister of the Jewish nation. 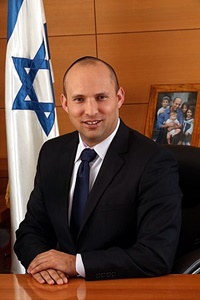 The coalition also succeeded in the improbable feat of approving a new “government of change” led by nationalist Naftali Bennett, as the diverse parties with differing ideologies united with the sole aim of unseating Netanyahu.
The new prime minister, however, is in a precarious position with a narrow 60-59 vote of confidence in the coalition of left-wing, centrist, right-wing and Arab parties with little in common, which  underscores  the fragility of the new government.
It may be noted that the far-right Yamina party that Bennett represents, has won only six of parliament's 120 seats in the last election.
Supporters of the coalition celebrated the rare win singing and dancing around even as Netanyahu, 71, vowed to be back sooner than expected. "If we are destined to go into the opposition, we will do so with our heads held high until we can topple it," he told parliament ahead of the swearing-in of Bennett as the new PM.
The new government will not reflect a change in policy or te Israeli government as the lose coalition is unlikely to touch on any serious issues with international repercussions, limiting itself to domestic issues.
Palestinians too do not expect any change in Israeli policies with Bennett, a former defence chief who advocates annexing parts of the occupied West Bank, heading the new government.
Under the coalition deal, Bennett, 49, an Orthodox Jew and high-tech millionaire, will be in office as prime minister till 2023 when he will be replaced by centrist Yair Lapid, 57, a popular former television host.
In the parliament, Bennett thanked the former prime minister for his "lengthy and achievemenet-filled service," showing there is no much differences between the two men. Bennett, who earlier served as Netanyahu's chief of staff, had a rocky relationship with him as defence minister, except
US President Joe Biden congratulated Bennett and Lapid, saying he looked forward to strengthening the “close and enduring” relationship between the two countries.
"My administration is fully committed to working with the new Israeli government to advance security, stability, and peace for Israelis, Palestinians, and people throughout the broader region," Biden said in a statement.
Nethanyahu’s failure was to win a decisive election victory that only helped divisive forces to rise and weaken the government, and the prime minister himself facing corruption trial even as he has denied any wrongdoing.
Prime Minister Narendra Modi expressed gratitude to outgoing Prime Mister Benjamin Netanyahu for cementing India-Israel strategic partnership and congratulated Naftali Bennett on becoming the Prime Minister of Israel.
"Excellency @naftalibennett, congratulations on becoming the Prime Minister of Israel. As we celebrate 30 years of the upgradation of diplomatic relations next year, I look forward to meeting you and deepening the strategic partnership between our two countries. @IsraeliPMthe Prime Minister said in a tweet.
Modi also expressed his gratitude to Benjamin Netanyahu for his leadership and personal attention to India-Israel strategic partnership. "As you complete your successful tenure as the Prime Minister of the State of Israel, I convey my profound gratitude for your leadership and personal attention to India-Israel strategic partnership @netanyahu," the prime minister said.
MORE REPORTS