The Rs25,000 crore Roshni Scam list made public by the J&K administration today includes the names of top politicians in the Gupkar Alliance, bureaucrats and businessmen who allegedly encroached upon public land. 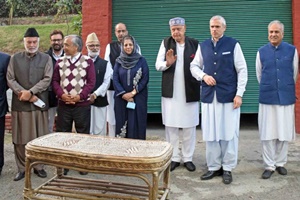 The Central Bureau of Investigations (CBI) has already registered 3 FIRs in the murky land scam. The central probe agency has registered the fourth case in the matter which will be probing the role of senior state leaders in the multi-crore land grab case.
The CBI investigation followed a Jammu and Kashmir High Court judgement declaring the controversial Roshni Act “unconstitutional” and directing that investigation into the land allotment scheme under it be transferred to the CBI.
CBI took over the Rs25,000 crore J&K land scam case earlier this month.
The CAG report estimated that against the targeted Rs25,000 crore, only Rs76 crore had been realised from the transfer of land into private ownership, IANS reported.
"While purchasing 3 Kanal of land in 1998, Farooq Abdullah encroached upon 7 Kanal land, which was forest land and state land. There was a conscious land loot by powerful people. They got benefits under Roshni Act declared unconstitutional by HC," said union minister Ravi Shankar Prasad.
Names of former finance minister Haseeb Drabu's two brothers — Ajaz Hussain Drabu and Iftikhar Ahmad Drabu – are also mentioned in the list.
IANS quoted sources in the CBI as saying that two officers played a key role in the scam and they currently hold the post of Chief Electoral Officer and secretary in the government of India.
Other high-profile names in the list include former minister and Congress leader Majid Wani, former home minister and National Conference leader Sajjad Kitchloo and former J&K Bank chairman MY Khan and retired Kashmir  IAS officer Mohd Shafi Pandit.
Referred to as the 'biggest' scam in Jammu and Kashmir, the scheme was initiated by the Farooq Abdullah government, allegedly meant to bring about a demographic change in the Jammu region.
The first case has been registered against unknown officials of the revenue department of Jammu. It is alleged that they had conferred undue benefits upon the illegal occupants of the state land by intentionally ignoring the laid down provisions of Roshni Act, thereby conferring ownership rights of the state land wrongfully to selective undeserving persons and hence inflicted huge monetary loss to the state exchequer, says the IANS report.
Reacting on the development the BJP termed it “heights of shamelessness” with BJP vice president from Kathua district saying, “Today the people are happy that abrogation of Article 370 has led to the exposing of people who had grabbed the land.”
The Congress also asked the Gupkar Alliance leaders to come out in the open and clarify their stand on the allegations in Roshini Scam.
Under the controversial Roshni Act, the encroached land was to be regularised by the state government and the money collected from encroachers was to be used to fund hydroelectric projects.
MORE REPORTS