Versatile singer S P Balasubramanyam passed away in Chennai today after fighting health complications that followed an infection of Covid-19 and his admission to hospital in August. He was 74. 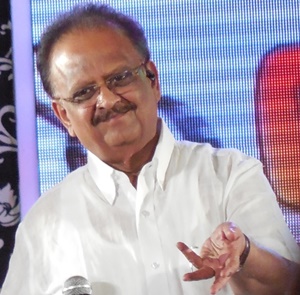 SPB breathe his last at 1:04 pm, hospital authorities in Chennai where he was admitted said.
The veteran singer was admitted to the hospital on 5 August after he tested positive for Covid-19. Although he was on ventilator as his health conditions were critical at the time, he had slowly started improving and had gained consciousness.
SPB fans had been pouring in 'get well soon' messages ever since the veteran singer was on a ventilator in August.
The hospital authorities suddenly issued an official statement today that his health deteriorated in the last 24 hours, calling it "extremely critical."
"Thiru SP Balasubrahmanyam remains on ECMO and other life support measures. His condition in the last 24 hours has deteriorated further warranting maximal life support and he is extremely critical. The team of experts at MGM Healthcare are closely monitoring his health condition," the hospital’s official statement read.
A versatile singer, SPB had sung over 40,000 songs covering 16 Indian languages and commanded a fan following across the nation.
Padma Bhushan SPB’s versatility can be gauged from the fact that despite no formal training in classical Carnatic music, the classical songs rendered by him in the Telugu film “Sankarabharanam” endeared him to all admirers of classical music.
SPB also composed music for around 45 films in Telugu, Kannada, Tamil and Hindi.
Sripathi Panditaradhyula Balasubrahmanyam, who was born in a Telugu Brahmin family in Nellore district of Andhra Pradesh on 4 June 1946, made his debut as a playback singer in 1966 with the Telugu film “Sri Sri Maryadha Ramanna.”
His father, late S P Sambamurthy, was a Harikatha artist who had also acted in plays. His mother was Sakunthalamma, who died on 4 February 2019.
SP Balasubrahmanyam is survived by wife Savitri Balasubrahmanyam, son SP Charan, daughter  Pallavi Blasubramanyam.
Charan is a noted singer, actor and producer, who primarily works in Tamil cinema.
SPB has a brother Jagadish Babu and his sister SP Sailaja is a singer and actress. She has lent her voice in Tamil, Telugu, Kannada, and Malayalam films. Till date, she has crooned about 6,000 songs.
SPB was awarded the Padma Shri in 2001 by the Government of India and the Padma Bhushan in 2011.
MORE REPORTS