Nobel laureate Abhijit Banerjee seems to be looking to inject his `experimental economics’ into Modinomics with an advice to trim the government’s holding in public sector banks to below 51 per cent, effectively making them takeover targets. 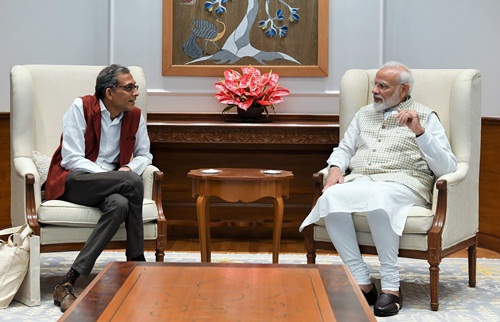 This, according to Banerjee, will help remove the fear psychosis among bankers that prevents them from taking risks. But Banerjee fails to explain how private ownership will help bankers to take risks.
Addressing a press conference in New Delhi, Banerjee said that the fear of investigation by the Central Vigilance Commission (CVC) in default cases has paralysed the banking system and bankers are scared to lend.
Reducing government equity in public sector banks under 51 per cent takes them out of the CVC's purview. According to him, it is the fear of a CVC probe in case of loan defaults that deters bankers and the banking system.
There are enough checks and balances in the banking system and the CVC has been very heavy-handed in its approach, he added.
He says if crises happen repeatedly and if there is a problem in bank balance sheets, then it should be stopped way ahead before it explodes. But, he does not say how to do it.
Banerjee also refused to take questions on the economy, and other contentious issues, while attempting to dispel the impression that he is a critic of the Narendra Modi government.
He also said that in his meeting with Prime Minister Narendra Modi earlier in the day, the prime minister jokingly said the media was trying to coax him to say anti-Modi things.
The media had tried to project Abijit Banerjee as a critic of the Modi government by blowing up some statements made by the Nobel laureate regarding the economic slowdown and his prior association with the Congress party’s Nyay scheme.
The organisers of the press conference had appealed to the media that questions on political or contentious questions should not be asked and instead the focus should be poverty alleviation.
During his interaction with the government and Niti Aayog, Banerjee is reported to have touched upon the issue of training of informal health professionals who do not have medical degrees but are providing health services.
The National Medical Commission 2019 envisages creation of a cadre of health workers called community healthcare workers (CHW) who are not doctors but are trained to offer health-related services in inaccessible areas.
MORE REPORTS