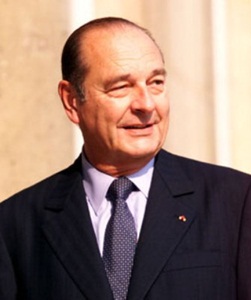 Chirac was head of state from 1995 to 2007, in what could be one of the longest continuous political careers for a European leader. He was twice president, twice prime minister and mayor of Paris for 18 years.
Chirac who vent France’s strong opposition to the US-led invasion of Iraq in 2003 is remembered for his anti-war stance internationally, and his approval ratings for his anti-war stance in France soared to 90 per cent.
“War is always a last resort. It is always proof of failure. It is always the worst of solutions, because it brings death and misery,” he said a week before the US-led coalition forces invaded Iraq.
Chirac, like Charles de Gaulle, ably presided over a state in which power was divided between the left and the right even as he championed the cause of a stronger European Union.
His vision was “not for a United States of Europe, but for a United Europe of States.”
Sovereignty for him was more a matter of principle and did everything to prevent another war, aligning with Germany in the European Union.
But his changing political views earned him nicknames like Chameleon Bonaparte and the Weathervane. Chirac’s political opponents called him a political chameleon as he was able to adjust his policies according to his reading of what voters wanted.
The only blot in his public life was conviction for embezzlement and misusing public funds to finance when he was mayor of Paris. However, Chirac received a two-year suspended sentence, with his legacy largely intact.
Chirac, like De Gaulli, devoted much of his presidency to defending France’s greatness. He even threatened to use his UN Security Council veto against a resolution that would authorise military force to find and eliminate weapons of mass destruction in Iraq in 2003.
“We are not refusing or rejecting war outright. If we have to wage war... we are not pacifists. We are not anti-American either,” Chirac told CNN on March 17, 2003.
Three days later, the United States and Britain invaded Iraq without UN approval. No weapons of mass destruction were ever found.
After retiring from public office, Chirac drew crowds of journalists and admirers in one of his last public appearances which was, characteristically, a visit to the 2011 annual Farm Show.
Born in 1932 in Paris to a middle-class family from the central rural region of Correze, Chirac began his political career in the late 1950s after studying at the elite Sciences Po university and ENA civil service academy.
His left leanings as an youngster changed when he became an army officer when he linked up with the ultra-nationalist Algerie Francaise party. But changeed tack again to become a moderate Gaullist and, by 1967, he was a junior minister in the De Gaulli government.
He changed course yet again post De Gaulli, abandoning the Gaullist movement in 1974 and backing non-Gaullist moderniser Valery Giscard d’Estaing for president.
Chirac was just 41 when Giscard made him prime minister on 28 May 1974, after winning power, but he quit two years later after falling out with Giscard over the extent of his powers.
He turned his back on Giscard by forming a new Gaullist party of his own, the Rally for the Republic (RPR) in 1976, which then become the Union for a Popular Majority (UMP), and changed name again to the current Les Republicains.
The following year he was elected as Paris’ first mayor - starting an 18-year career at City Hall that would come back to haunt him.
He won major electoral victories in 1995 and 2002, when was re-elected after a fraught battle with far-right candidate Jean-Marie Le Pen.
He secured a landslide victory in that election but that was more a vote against Le Pen than a resounding vote of confidence.
Though President Georges Pompidou once referred to him as a “bulldozer” for his ability to get things done, Chirac’s presidency is remembered mostly as a time of stasis.
He ended compulsory military service and started moves that reintegrated France into the NATO defence alliance, reversing a policy set in the 1960s.
He sought as president to reduce unemployment and cut public debt, and steered France into Europe’s monetary union, but did little to modernise the economy or the state.
He became one of Europe’s main standard bearers. He forged an alliance with German Chancellor Gerhard Schroeder which brought Europe’s two traditional powers closer together but upset some of their European Union partners.
After leaving the Elysee in 2007, he lived a quiet life with his wife Bernadette on Paris’ Quai Voltaire in an apartment loaned by Lebanon’s Hariri family, and worked on his memoirs.
Suffering from neurological problems, he was rarely seen in public at the end of his life.
MORE REPORTS