The last rites of senior BJP leader and former NDA minister Arun Jaitley were performed with full state honours on Sunday at Nigambodh Ghat in the national capital. 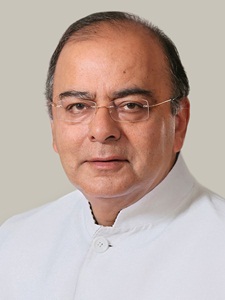 The senior leader passed away on Saturday at the age of 66 following prolonged illness.
The cremation was attended by scores of political leaders cutting across party lines and his admirers. Vice president Venkaiah Naidu, party president and home minister Amit Shah, party's working president J P Nadda, defence minister Rajnath Singh, union ministers Smriti Irani, Anurag Thakur and Nirmala Sitharaman; Congress leaders Jyotiraditya Scindia and Kapil Sibal were among those who attended the cremation. BJP veteran LK Advani, Jaitley’s mentor, was also present.
Prime Minister Narendra Modi, who is attending the G7 summit in France, was unable to attend the cremation. Delhi chief minister Arvind Kejriwal and his deputy Manish Sisodia, senior Congress leaders Jyotiraditya Scindia and Kapil Sibal were also present. Chief ministers of Maharashtra, Gujarat, Bihar, Karnataka and Uttarakhand, Devendra Fadnavis, Vijay Rupani, Nitish Kumar, B S Yediyurappa and Trivendra Singh Rawat, respectively, were also there.
Earlier, mortal remains of the senior leader was taken to the BJP headquarters from where it was carried in a flower-decked gun carriage to the cremation ground. The BJP stalwart’s last rites was performed by his son Rohan.
Jaitley was admitted to AIIMS on 9 August after he complained of breathing problems. Earlier, in September 2014, he had undergone bariatric surgery and in May last year, he underwent renal transplant surgery. He also underwent treatment in the US in January this year.
Jaitley is the second senior BJP leader to pass away this month. Former external affairs minister Sushma Swaraj breathed her last on August 6 after prolonged illness.
Jaitley’s death marks the end of an era in Indian politics, especially for the BJP. He along with Swaraj and Ananth Kumar had formed the core of BJP’s national leadership after Atal Bihari Vajpayee-led NDA lost power to the Congress in 2004.
The three leaders, along with M Venkaiah Naidu, had steered the BJP for a decade when it was in the Opposition. When NDA returned to power in 2014 under Narendra Modi, Jaitley was key in coordinating between the government and the key stakeholders within the RSS on major policy decisions.
MORE REPORTS