Sushma Swaraj, former external affairs minister and senior BJP leader, passed away on Tuesday night. She was 67. The senior BJP leader was brought to AIIMS around 9:30 pm where she was straight away taken to the emergency. Doctors said she died of a cardiac arrest. 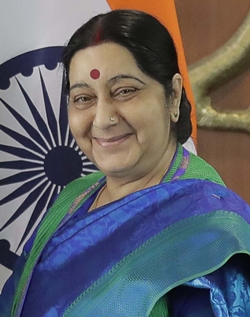 Swaraj, who made the foreign ministry accessible to all through social media, had health complications related to diabetes, but had no immediate health problem. She underwent a kidney transplant in 2016 and despite a few spells of hospitalisation, was understood to be getting better.

Reports said Swaraj was doing well till afternoon but around 9.30pm, she suffered a sudden cardiac arrest. She was rushed to AIIMS at 9.45pm. However, Swaraj couldn’t be revived.

Several senior ministers, including Harsh Vardhan, Rajnath Singh, Smriti Irani, Prakash Javadekar as well as members of Parliament, reached AIIMS after she was admitted to the hospital.

"A glorious chapter in Indian politics comes to an end. India grieves the demise of a remarkable leader who devoted her life to public service and bettering lives of the poor. Sushma Swaraj ji was one of her kind, who was a source of inspiration for crores of people," Prime Minister Narendra Modi said in a series of tweets.

Swaraj had put out a tweet in the evening congratulating Prime Modi after the Centre's move to revoke special status for Jammu and Kashmir and bifurcate the border state into two Union Territories secured Parliament's approval.

Prime Minister Modi, in his tweets, hailed Swaraj as a "prolific orator and outstanding parliamentarian" and said she was admired and revered across party lines. "She was uncompromising when it came to matters of ideology and interests of the BJP, whose growth she immensely contributed to," Modi said.

"An excellent administrator, Sushma Ji set high standards in every ministry she handled. She played a key role in bettering India's ties with various nations. As a minister we also saw her compassionate side, helping fellow Indians who were in distress in any part of the world," he said.

"Extremely shocked to hear of the passing of Smt Sushma Swaraj. The country has lost a much loved leader who epitomised dignity, courage & integrity in public life. Ever willing to help others, she will always be remembered for her service to the people of India," President Ram Nath Kovind tweeted.

Defence minister Rajnath Singh said he was deeply shocked and anguished by the sudden demise of an extremely valued colleague. External affairs minister S Jaishankar said, "Deeply shocked to learn of the passing away of Smt Sushma Swaraj. Difficult to accept this news. The whole nation grieves, the foreign ministry even more so."

BJP president Amit Shah condoled her death and called it an "irreparable" loss. He recalled her role as leader of opposition in Lok Sabha, saying she was a "forceful voice of BJP" in the House. “A powerful orator, she left an indelible mark as a popular leader,” he added.

Swaraj’s long-term colleague and former finance minister Arun Jaitley said he was “saddened, pained and broken on demise of Sushmaji”. “She was one of the most outstanding politicians in the present era. She distinguished in all positions. She leaves behind a void which is difficult to fill,” he added.

The Congress condoled her demise. "We are saddened to hear about the untimely demise of Smt Sushma Swaraj. Our condolences to her family and loved ones," the party said. "I'm shocked to hear about the demise of Sushma Swaraj Ji, an extraordinary political leader, a gifted orator and an exceptional Parliamentarian, with friendships across party lines. My condolences to her family in this hour of grief. May her soul rest in peace. Om Shanti," Congress leader Rahul Gandhi said on Twitter.

Swaraj had a kidney transplant in 2016 and had opted out of contesting Lok Sabha polls earlier this year for health reasons. She is survived by her husband Swaraj Kaushal and daughter Bansuri.