Former British Foreign Secretary Boris Johnson has launched his bid for UK premiership with calls to walk out of the European Union with or without a deal, sounding US President Donald Trump’s advice to anyone who takes over as the new British prime minister. 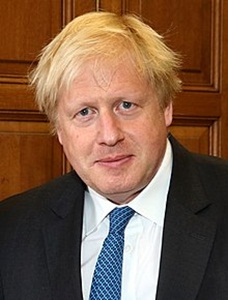 Boris Johnson has emerged as the frontrunner in the race for the next British Prime Minister, after Prime Minister Theresa May tenders her resignation on Friday having failed to deliver Brexit on time
Theresa May, however, leaves behind a divided nation and parliament with no consensus on the way ahead for the word’s fifth largest economy.
Johnson, a former foreign minister who resigned in protest at May’s handling of Brexit, looks the favourite to win a crowded contest, fielding about 13 contestants.
US President Donald Trump, who is on a state visit to Britain, also tried to influence decision in the UK with comments that anyone who succeeds Theresa May as British prime minister should lead the country out of the EU with or without a deal.
Whoever takes over as Britain’s next prime minister should not be afraid to “walk away” from negotiations with Brussels and should refuse to pay the agreed divorce bill, he told the Sunday Times newspaper.
Trump had, earlier, in an interview with another newspaper commented that former Foreign Secretary Boris Johnson would be an “excellent” replacement for May.
“If I get in we’ll come out, deal or no deal, on October the 31st,” Johnson was seen telling a member of the public in a campaign video released on Twitter.
“Cut some taxes and you get more money in,” he is seen telling another member of the public, while also arguing for more investment in education, infrastructure and healthcare.
“Now is the time to unite our society, and unite our country. To build the infrastructure, to invest in education, to improve our environment, and to support our fantastic NHS (National Health Service),” he said.
“To lift everyone in our country, and of course, also to make sure that we support our wealth creators and the businesses that make that investment possible.”
Britain is rolling out the red carpet for the President this week, starting with a private lunch with Queen Elizabeth II and a state banquet at Buckingham Palace.
Trump’s visit also invited protests over what London Mayor Sadiq Khan described as his “divisive behaviour”, while opposition politicians are boycotting the banquet.
Trump had also embarrassed May with remarks on Brexit during his visit to Britain in 2018. And yesterday, he again urged the next government to follow his own negotiating rule book.
“If they don’t get what they want, I would walk away... If you don’t get the deal you want, if you don’t get a fair deal, then you walk away,” he said.
May has already agreed to pay £39 billion (€45 billion, $50 billion) to cover Britain’s liabilities as it moves to sever four decades of EU membership.
But Trump said: “If I were them I wouldn’t pay $50 billion. That is me. I would not pay, that is a tremendous number.”
British Parliament had thrice rejected the divorce agreement that May signed with Brussels in November 2018, and she has had to delay Brexit twice and finally resign as prime minister.
MORE REPORTS