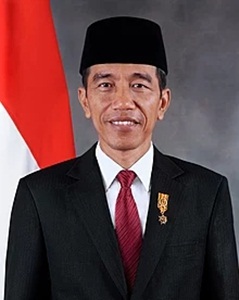 The official result released by the General Election Commission (KPU) while giving Widodo a comfortable victory, it could trigger a legal challenge and potential street protests after Prabowo claimed widespread cheating.
Widodo - known as Jokowi - has cultivated a "man of the people" image. He has been president since 2014 when he also beat Prabowo in a hotly-contested vote.
The 57-year old comes from humble beginnings and has focused his campaigns very much around his image as a "man of the people".
He first came to international prominence by becoming governor of Jakarta in 2012.
The result was released a day ahead of schedule in the early hours today, amid fears of violent unrest. An AFP report said around 32,000 security personnel were deployed across the capital Jakarta.
Widodo’s rival Prabowo Subianto, 67, had alleged "widespread cheating" and warned of potential street protests, but has not yet confirmed if he will challenge the result in court.
Prabowo Subianto, a former general who also ran against Widodo in 2014, lost a court challenge following an election defeat.
Azis Subekti, a witness from the retired general's campaign team, however, refused to sign the results this time. "We won't give up in the face of this injustice, cheating, lies, and these actions against democracy," he said.
In the 17 April poll, more than 192 million people were eligible to vote for electing 20,000 local and national lawmakers.
Although the campaign saw religion playing a key role, independent observers have said to voting was free and fair.
Authorities have appealed for calm and increased security measures in a bid to manage tensions.
Security personnel have been stationed in front of the election commission's office, backed by razor wire and water cannon.
On Friday police said they had arrested dozens of suspected terrorists with links to Islamic State (IS), some of whom had allegedly planned to bomb political rallies when the vote result was released.
Though Indonesia has no official state religion and the right to practise other faiths is enshrined in the constitution, some 80 per cent of the country is Muslim.
Conservative Muslim groups have grown increasingly vocal in recent years, and observers say the presidential candidates both sought to tout their Islamic credentials.
Widodo, himself a religious moderate, picked powerful cleric Ma'ruf Amin as his running mate, while Prabowo promised to protect Islamic leaders and increase funding for religious schools.
MORE REPORTS