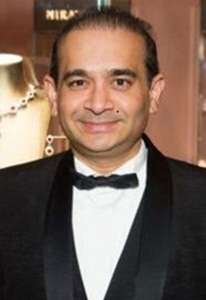 The Scotland Yard police from Holborn arrested the elusive diamantaire on a warrant issued by London's Westminster Magistrates' Court. He will be produced before court shortly today.
It is believed that the 48-year-old fugitive jeweller will be formally charged at Westminster Magistrates' Court, following which he is expected to seek bail.
Modi has allegedly cheated Punjab National Bank through fraudulent issuance of Letters of Undertakings (LoUs) and Foreign Letters of Credit (FLCs), thereby siphoning off funds worth Rs6,498.20 from PNB's Brady House branch in Mumbai while his uncle and aide Mehul Choksi has been accused of swindling Rs7,080.86 crore, also from PNB.
An LoU is a guarantee given by an issuing bank to Indian banks having branches abroad to grant short-term credit to the applicant.
Modi had fled immediately after the PNB scam surfaced last year. Since then Indian authorities had sounded the Interpol, which in turn issued a Red Corner Notice against Modi in June.
The external affairs ministry had also sent an extradition request to the United Kingdom in August last year.
Both the Enforcement Directorate and the CBI are probing the PNB scam involving Modi and Choksi, who both have fled India last year. Choksy had since taken refuge in Antigua.
The CBI has registered an FIR against Modi, Choksi, Modi's brother and wife. While his wife Ami is a US citizen, his brother Nishal is a Belgian citizen.
MORE REPORTS