Pramod Sawant, who was speaker in the Goa assembly, has taken oath as the new chief minister following the demise of Manohar Parrikar on Sunday, even as members of the opposition Congress party met governor Mridula Sinha on Monday to stake claim for government formation in the state. 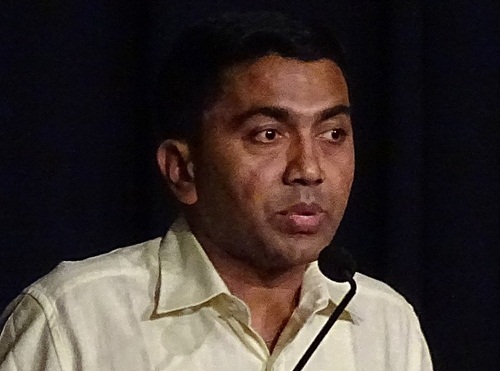 Pramod Sawant, who was speaker in the Goa assembly, has taken oath as the new chief minister following the demise of Manohar Parrikar on Sunday, even as members of the opposition Congress party met governor Mridula Sinha on Monday to stake claim for government formation in the state.
Reports say Sawant took oath as chief minister early in the morning, at about 2 am and is due to be sworn in at 3 pm today.
Hailing from Cotombi, a rural village in Bicholim, Sawant’s humble origins and saffron leanings right from his early days grounded him in the Hindutva ideology. His father, Pandurang Sawant, a former zilla panchayat member, was actively associated with Bharatiya Jana Sangh, Bharatiya Mazdoor Sangh and was a recognised BJP loyalist.
After completing his graduation in Ayurveda medicine, Sawant completed his post-graduation studies in Medico-Legal System and also did his masters in social work.
Sawant plunged into politics in 2008 after the Sanquelim (now Sakhali) assembly seat fell vacant. He quitting his government job as an Ayurveda physician in the north district hospital at Mapusa to contest the byelection as a BJP candidate, but lost. He, however, won in the 2012 assembly elections and in the subsequent 2017 polls.
And, when Manohar Parikkar was made chief minister in the BJP-led coalition government that came to power following the 2017 polls, Sawant was elected as the speaker of Goa assembly, making him the youngest speaker from among all state legislative assemblies at that time.
Sawant who has been close to Parrikar and was groomed into politics by Parrikar himself was also the natural choice of the departed BJP leader. Sources said that his staunch loyalty to the party weighed in favour of his selection as Parrikar’successor. Besides the BJP’s requirement of a relatively younger candidate to lead the party for the next 10-15 years worked  in his favour.
With a current assembly strength of 36 MLAs against the total number of 40, the current majority mark in the Goa assembly is 19. Congress is the single largest party in the state with 14 MLAs. The BJP has 12 legislators and support of the Goa Forward Party (GFP) and the Maharashtravadi Gomantak Party (MGP) and Independents having three MLAs each. The NCP has one legislator.
Congress delegation met governor Mridula Sinha on Monday to stake claim for government formation as it is the single largest party in the assembly.
The BJP is now engaged in hectic parleys with alliance partners MGF and GFP to arrive at a consensus and ministry formation.
Union minister and senior BJP leader Nitin Gadkari was in Goa since Sunday and is continuing parlays with partners GFP and MGP and his own partymen.
BJP MLA Vishwajit Rane and MGP leader Sudin Dhavalikar were both aspirants for the CM post. However, leaders of GFP were not called for the meeting.
Leader of the Maharashtrawadi Gomantak Party (MGP) Sudin Dhavalikar had on Monday met union minister and senior BJP leader Nitin Gadkari at a hotel near Panaji to discuss the political situation in the state.
The coalition partners of the Parrikar-led government had allied with BJP on condition that the government is headed by Manohar Parrikar, the then Defence Minister of India. The BJP, therefore, has no allies as of now. We therefore hereby once again stake claim to form the government."
MORE REPORTS