Manohar Parrikar, chief minister of Goa and former defence minister, passed away after battling pancreatic cancer for more than a year. His health had deteriorated over the last few days and worsened on Saturday. He died at his son's home on Sunday evening. 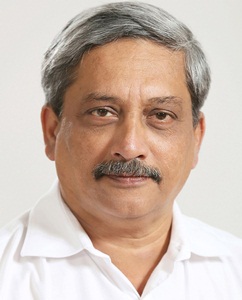 Four-time chief minister Parikkar, 63, who transformed Goa from a laggard to a dynamic economy, had in January said he "will serve Goa till my last breath." He fulfilled that – making public appearances with a tube in his nose and looking frail.
President Ram Nath Kovind, made the announcement of his death in a tweet and a condolence message. "Extremely sorry to hear of the passing of Shri Manohar Parrikar, Chief Minister of Goa, after an illness borne with fortitude and dignity. An epitome of integrity and dedication in public life, his service to the people of Goa and of India will not be forgotten," the President tweeted.
Later, Parrikar's office said, "Manohar Parrikar passed away today evening, after a spirited battle against cancer".
The Central government has announced a day's national mourning tomorrow, during which all schools and colleges in Goa would remain shut.
In his condolence message, Prime Minister Narendra Modi said, “ Shri Manohar Parrikar was an unparalleled leader. A true patriot and exceptional administrator, he was admired by all. His impeccable service to the nation will be remembered by generations. Deeply saddened by his demise. Condolences to his family and supporters. Om Shanti.
“Shri Manohar Parrikar was the builder of modern Goa. Thanks to his affable personality and accessible nature, he remained the preferred leader of the state for years. His pro-people policies ensured Goa scales remarkable heights of progress.
“India will be eternally grateful to Shri Manohar Parrikar for his tenure as our Defence Minister. When he was RM, India witnessed a series of decisions that enhanced India’s security capacities, boosted indigenous defence production and bettered the lives of ex-servicemen”.
Parrikar's health had been fluctuating for several days and worsened on Saturday morning. The former Defence Minister had been in and out of hospital in Goa, Mumbai, Delhi and New York since February last year. Last month, he was admitted in the Goa Medical College and Hospital near Panaji.
After his death was announced this evening, political leaders from across party lines expressed their grief.
"Goa BJP government was formed because of him. He also became defence minister. Again on party's request, he became the Goa chief minister," said union minister Nitin Gadkari, Manohar Parrikar's long-time friend and party colleague.
MORE REPORTS