Rajinikanth bats for Narendra Modi in NDA vs Mahagathbandhan

Superstar Rajinikanth who is on the cusp of a political carrier, today said that Prime Minister Narendra Modi is actually stronger than the alliance of 10 opposition parties that are ganging up to fight the Bharatiya Janata Party-led National Democratic Alliance (NDA). 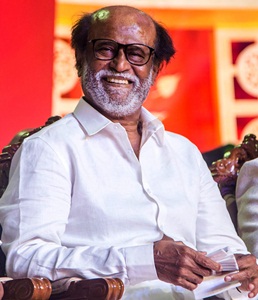 Rajnikant, who on Monday remarked that the Bharatiya Janata Party may be dangerous for the opposition parties that are teaming up to fight the might of Narendra Modi, today said if 10 opposition parties are ganging up against the BJP, then the person on the other side must be stronger.
“My answer was if the opposition parties are seeing the BJP as a dangerous party, then for them (opposition parties), the BJP is a dangerous party. It is for the people to decide,” the actor-turned-politician clarified while speaking to reporters in Chennai today.
“Who is powerful? If 10 people are ganging up against one? Imagine who is powerful? You can decide,” he added, endorsing PM Modi in the Mahagathbandhan versus NDA battle.
While responding to a reporter’s question in Chennai on Monday, Rajinikanth had said that if most of the opposition parties feel the BJP is dangerous, then it must be so.
The actor who is believed to be close to BJP and supported the government’s demonetisation decision when it was announced in November 2016, however, said it was not implemented properly.
“The implementation went wrong, it (demonetisation) should have been carried out after a detailed research." Rajini said.
Minutes after the policy was announced on 8 November 2016, Rajinikanth had tweeted, “Hats off @narendramodi ji . New india is born #JaiHind.”
Asked about the centre’s denial to process the letter sent by the Tamil Nadu government to the President seeking premature release of the seven convicts in former prime minister Rajiv Gandhi’s assassination case, the actor said quipped, "Which seven convicts. I am hearing about it only now."
“I am not a fool to not know about the Rajiv Gandhi assassination case. I was one of the first persons to meet Perarivalan when he came out on parole. The matter is with the governor but on humanitarian grounds, they need to be let out. It has been 27 years.”
Rajinikanth also said that strict laws should be enforced against sexual harassers of girls, in reaction to the death of an Adivasi girl who was raped in Dharmapuri. The 16-year-old tribal girl succumbed to her injuries after she was allegedly sexually assaulted by two teenagers who belong to her own village.
Commenting on the Sarkar row, Rajinikanth said: “I condemn it. This is violence and I condemn it. Attacking theatres and tearing banners and stopping the film is wrong. There should be discussion first.”
On the practice of freebies being doled out in Tamil Nadu ahead of elections, Rajinikanth said there was nothing wrong with freebies but the important question is for whom they are meant and when are they supposed to be given. “One should not give freebies for election purposes,” he told reporters.
MORE REPORTS