Veteran journalist Kuldip Nayar passed away late on Wednesday at the age of 95. Nayar breathed his last at the Escorts Hospital in New Delhi on the intervening nights of 22 and 23 August, at 12.30 am. 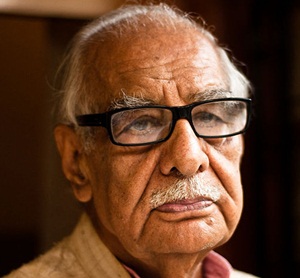 His funeral will be held at 1 pm today, at the Lodhi Road crematorium in New Delhi.
Nayar was appointed High Commissioner of India to the United Kingdom in 1990 and was also nominated as a Member of Parliament in the Rajya Sabha in 1997 .
A journalist who stood his ground during the emergency, Kuldeep Naya was also an author, with 15 books to his credit.
Senior journalists, politicians, and other eminent personalities paid tribute to the veteran journalist. Prime Minister Narendra Modi, former Prime Minister Manmohan Singh as well as the Editors Guild of India, which Kuldip Nayar was a founding member, and people across the social strata mourned the passing away of Kuldip Nayar.
Prime Minister Narendra Modi condoled the passing away of veteran journalist and former Rajya Sabha member Kuldip Nayar.
“Kuldip Nayar was an intellectual giant of our times. Frank and fearless in his views, his work spanned across many decades. His strong stand against the Emergency, public service and commitment to a better India will always be remembered. Saddened by his demise. My condolences,” the prime minister said.
Nayar, originally born in Sialkot in 1923, was deeply interested in peaceful relations between India and Pakistan. In his autobiography `Beyond The Lines’, he writes about his interview with Pakistan’s nuclear scientist `Abdul Qadeer Khan’, during which the latter revealed that Pakistan had a nuclear device well before it was thought to have had it.
When the Emergency was declared, Nayar was one of the first journalists to be put in jail.
As a journalist, he has documented in detail, human rights violations by the state.
MORE REPORTS