An icon of Dravidian politics and five-time chief minister of Tamil Nadu M Karunanidhi passed away on Tuesday at the age of 94. The veteran politician was reported dead at 6.16 in the evening by doctors at the Kauvery Hospital in Chennai, where he was admitted for treatment two weeks ago. 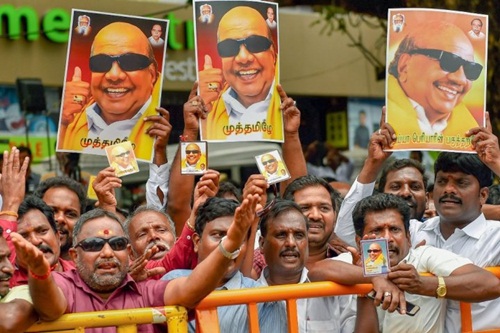 His body was taken to his Gopalapuram residence last night, after which it was shifted to Rajaji Hall. Several political leaders, including Prime Minister Narendra Modi, paid their last respects to Karunanidhi.
Meanwhile, the Madras High Court, after a late-night hearing, granted permission to bury Karunanidhi behind Anna Samadhi — the memorial of his mentor C N Annadurai — on Marina Beach.
Prime Minister Narendra Modi arrived at Rajaji Hall in Chennai early in the morning to pay last respects to DMK patriarch Karunanidhi, minutes after the Madras High Court allowed the Dravidian icon to be buried next to his mentor CN Annadurai at Marina Beach.
The AIADMK government had denied permission for Karunanidhi to be buried next to Annadurai, MG Ramachandran and Jayalalithaa at the iconic mausoleum complex, saying he was not a sitting CM. The government also pointed out that Karunanidhi himself had denied permission for MGR’s wife Janaki to be buried at Marina. Instead the state government offered a two-acre site on Sardar Patel Road near the memorials to Rajaji and Kamaraj.
The DMK, however, asserted that there was no rule that only a sitting CM could be buried near Anna Salai and cited Karunanidhi’s long and eventful political journey.
Among those who paid respects to the five-time CM are Tamil Nadu chief minister E Palaniswami, deputy CM O Panneerselvam, film stars Rajinikanth and Kamal Haasan and a host of other leaders from across the country
Both houses of Parliament, meanwhile, will be adjourned for the day after paying tributes to Karunanidhi.
"With profound sorrow, I've to inform the House about the sad demise of Karunanidhi who passed away on Aug 7. He served as CM of Tamil Nadu for five times. In his demise, country has lost highly popular and eminent personality," said Sumitra Mahajan, Lok Sabha speaker, earlier today.
Karnataka chief minister HD Kumaraswamy and deputy chief minister G Parameshwar arrived at Rajaji Hall to pay last respects to late Tamil Nadu chief minister M Karunanidhi.
Karunanidhi will be laid to rest between Annadurai and Jayalalithaa. DMK has sought land for Karunanidhi between Anna Memorial and Jayalalithaa Memorial, which is under construction.
Union territory of Puducherry, a DMK stronghold, will observe seven-day mourning in the wake of Karunanidhi's demise. Puducherry chief minister V Narayanasamy posted a picture paying floral tribute to late Tamil Nadu chief minister M Karunanidhi. "Cabinet Colleagues pays floral tribute to former Chief Minister of Tamil Nadu Kalaignar Dr M Karunanidhi at Puducherry Assembly. As a mark of respect, Puducherry will observe seven days Mourning in the UT of Puducherry from 7th August 2018," the Puducherry CM tweeted.
DMK cadre kept thronging the venue while senior leaders, including Durai Murugan, were inspecting the arrangements at the burial site at Marina Beach amidst reports that the AIADMK government in Tamil Nadu was likely to move the Supreme Court against the Madras High Court order, in order to save face.
Supporting the AIADMK view, Swaminathan Gurumurthy,  co-convener of Swadeshi Jagran Manch and RSS ideologue in Tamil Nadu, told News18 that DMK patriarch M Karunanidhi should not be buried at Marina Beach. “All the former chief ministers, including Rajaji and Kamraj, have been given burial on the other side near the IIT. It is only sitting chief ministers who are buried on the Marina Beach. So technically, former chief minister should be on the other side where other former CMs are buried...I’m just giving a rationale,” said Gurumurthy.
The Tamil Nadu government's refusal of Karunanidhi’s political heir MK Stalin's plea to grant Karunanidhi a burial and a memorial on the Marina beach, had created a furore among DMK supporters, many of whom resorted to violence and clashed with the police. Police had to lathi-charge angry mobs just outside Kauveri hospital in Chenna.
MORE REPORTS