Indu Malhotra was sworn in as a Judge of the Supreme Court today, becoming the seventh woman judge of the apex court and the first woman advocate to be elevated to a Supreme Court judge’s post. 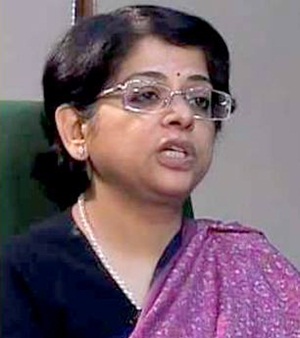 Chief Justice Dipak Misra administered the oath of office to Indu Malhotra around 10.30 am. And, by 11.15 am, Malhotra was already in her new role as a Supreme Court judge, sitting in Court No 1 with CJI Dipak Misra and Justice D Y Chandrachud.
By lunch time, the bench has heard the centre’s plea for an extension on drafting a scheme on Cauvery, and senior counsel Indira Jaising’s plea seeking transfer of the Kathua gangrape and murder case to Chandigarh.
With her appointment the total number of judges in the Supreme Court has risen to 25.
The Supreme Court has been functioning with only one woman judge, Justice R. Banumathi, for the past three years after Justice Ranjana Prakash Desai retired from service on 29 October 2014.
Justice Malhotra obtained her law degree from the Delhi University, after completing her BA (Hons.) in political science from Lady Shri Ram College. She joined the legal profession in 1983 and soon made her way to be qualified an Advocate-on-Record in the Supreme Court.
Malhotra was also the second woman to be given the designation of senior advocate by the apex court, with late Justice Leila Seth being the first.
Daughter of noted advocate Om Prakash Malhotra, Indu Malhotra was born in Bengaluru in 1956. She moved to Delhi at a young age.
In a 2012 interview to myLaw.net, an online legal portal, she recollected that her father never allowed her and her siblings to slack off. “We had no television in the house till we passed out of school,” she said in the interview. “He didn’t like us reading comics or Mills & Boon”.
Malhotra joined the legal profession in 1983 and later became an advocate-on-record for the Supreme Court.
She was standing counsel for Haryana in the early ‘90s, and has also represented statutory bodies like SEBI, Delhi Development Authority, and Council for Scientific and Industrial Research (CSIR) before the Supreme Court.
MORE REPORTS